Bill Walton Net Worth and Salary: Bill Walton is an American retired professional basketball player and television sportscaster who has a net worth of $20 million. After establishing his reputation as a skilled basketball player during his college years with the UCLA Bruins, Walton later went on to join the Portland Trail Blazers in the 70s. In 1977, he won the NBA Finals Most Valuable Player Award – the same year that the Trail Blazers won the NBA Championship. Another title came in 1986, this time with the Boston Celtics.

While Bill reached unbelievable heights during his time in the NBA, he also struggled continuously with injuries – mostly involving his feet. Although Walton had to sit out a number of seasons due to these issues, he eventually bounced back with the Celtics and won another NBA title.

After retiring, Walton was celebrated for overcoming his notable stuttering problem and becoming a sportscaster. Bill established himself as a popular color commentator, mostly for ESPN.

Early Life: William Theodore Walton III was born on November 5th of 1952 in La Mesa, California. Raised alongside four siblings, Walton took music lessons as a child. He later gravitated more towards sports, following in the footsteps of his older brother, Bruce. Bill began his basketball journey in elementary school. The sport represented a welcome escape for him, as he struggled with a stutter and was extremely shy.

In high school, Bruce and Bill played together and formed a strong partnership. While Bill showed tremendous potential during these early years, his tendency to become injured also surfaced. Just in his high school years, Walton suffered several broken bones and underwent knee surgery. A massive growth spurt during his sophomore year made it difficult for the young player to get used to his body.

After graduating from high school, Bill attended UCLA on a basketball scholarship, despite offers from many other schools. In 1973, Walton took part in what has been called the best NCAA Championship game he ever played. The UCLA Bruins faced off against Memphis State, with Walton scoring 44 points out of 22 attempts. His record for most points in an NCAA Championship game still stands in 2020.

NBA Career: In 1974, the Portland Trail Blazers selected Walton as the number-one overall pick during the 1974 NBA Draft. Despite being a hot prospect, Bill's first two seasons were disappointing. Chronic foot injuries held him back, and he broke a number of bones. Still, Walton performed well as a rookie within his first two years. Genuine glory came in the 1976-77 season.

That year, Jack Ramsay became the new head coach and led the Trail Blazers on an unexpected path to unheard of victory. No one expected Portland to do well, but Walton and the rest of the team proved their potential. Bill led the lead in rebounds per game and shots blocked per game. He was selected to participate in the NBA All-Star Game, but an injury prevented him from doing so.

By the end of that season, Walton and the Trail Blazers had reached the NBA Finals. Facing off against the Philadelphia 76ers, the Blazers won the final four games to claim the championship. Bill was named the Most Valuable Player of the finals, and scored 20 points with 23 rebounds in the Game 6 victory.

Injuries continued to be an issue for Walton over the next few years. Bill received a painkilling injection that allowed him to play during the 1978 Playoffs, despite having a broken foot. He then demanded to be traded, claiming that he and other players were not being treated fairly as they were struggling with injuries.

He then spent six years with the San Diego Clippers, but he was unable to make much of an impact due to continued injuries during the first few seasons. By the mid-80s, he was returning to his top potential. After the 1984-85 season, Walton joined the Boston Celtics. He joined a strong team, and although he played mostly as a substitute, Bill brought something special to the team. In 1986, the Celtics defeated the Houston Rockets to claim the NBA title. Although Walton continued to play for another season, this marked the last real chapter of his playing career.

Career Earnings: During his NBA career, Bill earned a total of roughly $3 million in salary. That's the same as around $7.5 million in today's dollars. His highest-paying season was 1984-1984 when he earned $1.35 million from the Clippers. He then earned $425,000 per season for his three seasons with the Boston Celtics.

Broadcasting Career: After overcoming a stuttering problem at the age of 28 with the help of broadcaster Marty Glickman, Walton began to seriously consider a career as a sportscaster. Bill first worked for CBS in the early 90s before a long stint with NBC until the early 2000s. In the modern era, he is best known for working with ESPN. In 2009, he left ESPN after a 19-year career in broadcasting to get treatment for a back injury. After he received surgery on his back, he returned to his commentating work on a sporadic basis.

After Bill's playing career came to an end, he also released a memoir called "Back from the Dead: Searching for the Sound, Shining the Light and Throwing it Down." This book made it onto the "New York Times" bestseller list for two weeks after its release.

Health Issues: Bill Walton had his ankles surgically fused because his injury problems were too severe to deal with over time. Many of his injury problems during his playing career have been attributed to excessive use of painkillers, which were prescribed to him by various doctors. In 2009, Walton underwent an 8-hour surgical procedure to fuse his spine. This involved titanium rods being inserted into his back. The surgery was successful, although he was unable to move freely for a year after the procedure.

Real Estate: In 2010, Bill and his wife paid $3.2 million for a home in San Diego, California. Today the home is likely worth upwards of $5-6 million.

Personal Life: Bill was married to Susan Guth from 1979 to 1989. In 1991 he married Lori Matsouka. He and Susha had four sons, including future NBA star/coach, Luke Walton. 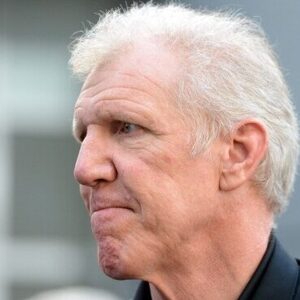