Austin Croshere Net Worth: Austin Croshere is a retired American professional basketball player who has a net worth of $20 million. Born in Los Angeles, California, in 1965, Austin Croshere played college basketball across the country at Providence from 1993 until 1997. The six-foot-ten, 235-pound power forward was drafted 12th overall during the first round of the 1997 NBA Draft by the Indiana Pacers. He played with the Pacers until 2006 when he joined the Dallas Mavericks. He later played for the Golden State Warriors (2007-2008), the Milwaukee Bucks (2008-2009), and the San Antonio Spurs (2009). He has not played since he signed a ten-day contract with the Spurs; the team released him on January 28, 2009. Croshere finished his pro playing career with 4,475 points, 2,649 rebounds, and 627 assists. He played in close to 70 postseason games, including a 23-game run with the Pacers during the 2000 season where he averaged nearly eleven points, five rebounds, and 1.5 assists per playoff game. He competed internationally for the U.S. men's national team and earned a gold medal at the Summer Universiade in 1995 in Fukuoka. Croshere has worked in sports broadcasting since his retirement, and currently works as an analyst for Pacers games on Fox Sports Indiana. 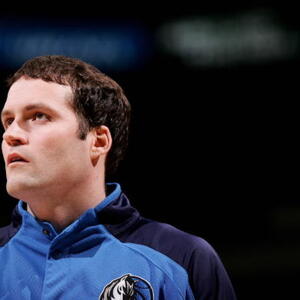