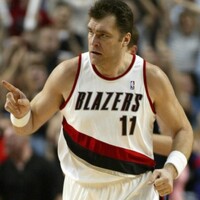 Arvydas Sabonis Net Worth: Arvydas Sabonis is a retired Lithuanian professional basketball player who has a net worth of $18 million. Arvydas Sabonis was born in Kaunas, Lithuania, in 1964, and made his professional basketball debut with Zalgiris Kaunas in 1981. Sabonis played with that team until 1989 when he joined Forum Valladolid. He also played with Real Madrid from 1992 until 1995 before joining the Portland Trail Blazers in 1995, almost ten years after he was originally drafted by the club with the 24th overall pick of the first round during the 1986 NBA Draft. Sabonis played with the Trail Blazers until 2001 before playing with Zalgiris Kaunas from 2001 until 2002, and the Trail Blazers from 2002 until 2003. In 2003, he rejoined Zalgiris Kaunas until 2005, when he officially announced his retirement from the pro game. Sabonis' resume is littered with numerous accolades, including six Euroscar Player of the Year honors. He is a two-time Mr. Europa Player of the Year, a FIBA World Champion, and a three-time USSR League Champion. Sabonis won the Lithuanian Sportsman of the Year award four times and made three FIBA All-Tournament teams. In the NBA, Sabonis earned All-Rookie First Team honors. He was named to FIBA's 50 Greatest Players list in 1991 and was later inducted into the FIBA Hall of Fame close to two decades later in 2010. Sabonis finished his NBA career with 5,629 points to go along with 3,436 rebounds and 964 assists. Sabonis won an Olympic gold medal with the Soviet Union in Seoul in 1988. After his retirement from playing, he was named the president of the Lithuanian Basketball Association in 2011. After two years, he resigned the position, about a month after suffering a heart attack, but reconsidered about a week later. Sabonis' wife is Ingrida Mikeliontye, who's known as the first woman to have been crowned Miss Lithuania. They have four children together.