Antonio McDyess Net Worth: Antonio McDyess is an American retired professional basketball player who has a net worth of $60 million. Born in 1974 in Quitman, Mississippi, Antonio McDyess played college basketball at the University of Alabama after a prolific high school career. The Los Angeles Clippers chose McDyess with the second overall pick during the 1995 NBA Draft.

He made his rookie debut the same year after being traded to the Denver Nuggets, earning a spot on the All-Rookie First Team. McDyess has played for a handful of times during his career, including the Phoenix Suns, New York Knicks, Detroit Pistons, and San Antonio Spurs. While with the Nuggets in 2001, McDyess was named an NBA All-Star. He has appeared in the postseason several times, including one appearance in the finals with the Pistons in 2005. He competed on the U.S. men's basketball national team, helping guide the squad to a gold medal finish at the 2000 Olympics in Sydney, Australia. The six-foot-nine power forward/center has not played since being waived by the San Antonio Spurs in December of 2011. McDyess has appeared in more than 1,000 career NBA games, averaging eight points per game, eight rebounds per game, and two assists per game. 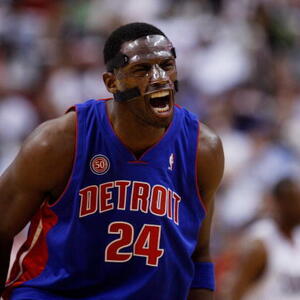