Andris Biedrins Net Worth: Andris Biedrins is a Latvian professional basketball player who has a net worth of $25 million. During his NBA career Andris earned $62 million in salary alone.

Andris Biedrins was born in Riga, Latvia in 1986. He played professionally with BK Skonto in his home country from 2002 until 2004. The Golden State Warriors drafted Biedrins with the eleventh overall pick during the first round of the 2004 NBA Draft. He played with Golden State for close to a decade until he was traded to the Utah Jazz during the summer of 2013. The Jazz went on to waive Biedrins during the spring of the following year; as of October 2014, the seven-foot, 250-pound center has yet to sign with a new team. Biedrins has played internationally for Latvia since he was a teenager; he was part of the 2004 Under-18 European Championship team, where he averaged more than 21 points and 14 rebounds per game. He's very active in a variety of charitable organizations. Biedrins has visited wounded American troops who served overseas in Iraq and took part in Golden State's Thanksgiving Food service. He also brought several underprivileged youth to Warriors games. Biedrins, who often goes by the nickname Beans, taught himself how to speak English as he was preparing for the 2004 draft in California. He has one child, a son named Emils. 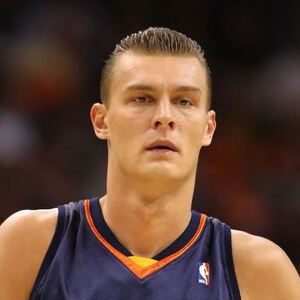