Andrew Bogut Net Worth and salary: Andrew Bogut is an Australian professional basketball player who has a net worth of $24 million. Born in Melbourne, Victoria, Australia, in 1984, Andrew Bogut played basketball in the United States at the University of Utah from 2003 until 2005. He was a first-team All-American player in 2005, the same season he won the Naismith College Player of the Year accolades, the John R.

Wooden Award, the Oscar Robertson Trophy, and Mountain West Player of the Year honors. The Milwaukee Bucks chose Bogut with the first overall pick of the first round during the 2005 NBA Draft. He played with the Bucks until 2012 when he was traded to the Golden State Warriors along with Stephen Jackson in exchange for three other players. He landed a three-year contract extension with Golden State during the fall of 2013. As of the fall of 2014, Bogut still plays with the Warriors. He earned NBA All-Rookie first-team honors in 2006, was placed on the All-NBA third team in 2010, and led the league in blocks in 2011. He has played for Australia's men's national team with appearances at the 2004 Olympics in Athens, the 2008 Olympics in Beijing, the 2012 London Olympics, and the 2006 FIBA World Championship. 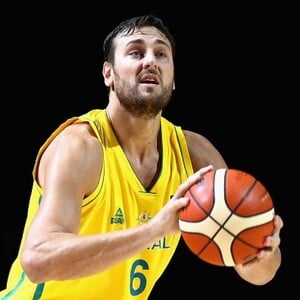