In 2000, he joined Spain's Minorisa.net Manresa and later Tau Ceramica until 2004. Nocioni made his NBA debut with the Chicago Bulls in 2004 despite going undrafted into the league. He played with the Bulls for the next five years until he joined the Sacramento Kings from 2009 until 2010. In 2010, he became a member of the Philadelphia 76ers, the last team he'd play with in the NBA. Nocioni later played with Argentina's Penarol de Mar del Plata before joining Laboral Kutxa Vitoria from 2012 until 2014. In 2014, he decided to play for Spain's Real Madrid, and, as of the fall of the same year, remains with the team. The six-foot-eight, 225-pound small and power forward has earned several career awards, including the ACB's Most Valuable Player Award in 2004. He is a two-time All-Euroleague Second Team player in 2003 and 2004. In 2013, Nocioni was named to the All-ACB team. He has competed many times internationally for Argentina and won one gold medal at the 2004 Summer Olympics in Athens. 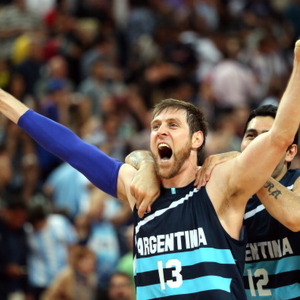