Andrei Kirilenko is a Russian professional basketball player who has a net worth of $50 million. Currently a forward for the Brooklyn Nets, Kirilenko was born on February 18, 1981 in Izhevsk, Russian SFSR, Soviet Union. At a towering six-foot-nine-inch height, Kirilenko, also known as AK47, began playing basketball professionally at fifteen years old.

His career began with the Russian Basketball Super League, followed by the CSKA Moscow, and in 1999 was drafted to the Utah Jazz. He has been a member of Russian national team for the Olympics since 2000 and has received several awards for his American and international careers including the award for Euroleague Defensive Player of the Year. Kirilenko became an NBA All-Star in 2004 and has been named Eurobasket MVP, Euroleague MVP, Russian League MVP, VTB United League MVP, and VTB United League Final Four MVP. After a brief return to Russia, he began playing for the Minnesota Timberwolves in 2012 and later joined the Brooklyn Nets in 2013. Andrei Kirilenko is a bronze medalist for his participation in the 2012 Summer Olympics on team Russia. He is currently married to Russian popstar, MaLo, who is daughter of Andrei Lopatov, a fellow Russian basketball player. They have two children by the names of Stepan and Fedya and are now American citizens. 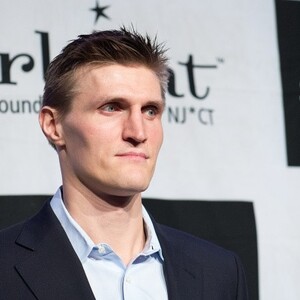