Andre Miller Net Worth: Andre Miller is an American professional basketball player who has a net worth of $40 million. Born in 1976 in Los Angeles, California, Andre Miller played college basketball at Utah from 1995 until 1999. He earned Western Athletic Conference Player of the Year honors in 1999 and had his number 24 retired by the school.

In 1999, Miller was a first team All-American. The Cleveland Cavaliers chose Miller with the eighth overall pick during the first round of the 1999 NBA Draft. The six-foot-two point guard played with the Cavs until 2002 when he was traded to the Los Angeles Clippers. Miller also played with the Denver Nuggets from 2003 until 2006, the Philadelphia 76ers from 2006 until 2009, the Portland Trail Blazers from 2009 until 2011, the Denver Nuggets from 2011 until 2014, and, as of the fall of 2014, the Washington Wizards. Miller was part of the NBA All-Rookie First Team in 2000 and led the league in assists in 2002. Miller has appeared in more than 60 playoff games throughout his career, most recently with the Wizards, where he played in eleven games. He played for the U.S. men's national team, appearing at the 1998 Goodwill Games in New York and the 2001 Goodwill Games in Brisbane. Miller and the team won two gold medals. 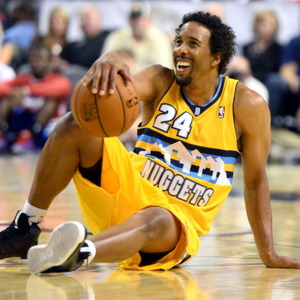