What is Andre Iguodala's Net Worth and Salary?

Andre Iguodala is a professional basketball player who has a net worth of $80 million. With the NBA's Golden State Warriors, he has won the NBA championship three times, and was named the MVP in the Finals in 2015. Additionally, Iguodala has played for the Philadelphia 76ers, Denver Nuggets, and Miami Heat, and was part of the gold medal-winning US national basketball team at the 2012 Summer Olympics in London.

Andre Iguodala was born in 1984 in Springfield, Illinois. He has an older brother named Frank. As a teen, he went to Lanphier High School, where he excelled both academically and athletically; among his achievements, he won All-Conference academic honors and was named a State Journal Student-Athlete of the Week multiple times. As a senior, Iguodala led his school's basketball team to a second-place finish at the Illinois High School Association Class AA state tournament.

Although he originally planned to play college basketball at Arkansas, Iguodala ended up attending the University of Arizona, where he joined such future NBA players as Luke Walton, Hassan Adams, and Mustafa Shakur. Iguodala established himself early on as one of the team's best all-around players, and helped lead Arizona to the NCAA tournament in both his freshman and sophomore years. After earning first-team all-conference honors in the Pac-10 as a sophomore, Iguodala left college to enter the NBA draft.

In the 2004 NBA draft, Iguodala was selected 9th overall by the Philadelphia 76ers. During his successful rookie season, he recorded a triple-double in a game against the Detroit Pistons, and was named to the All-Rookie First Team. The next season, Iguodala started in all 82 games, and had an average of 12.3 points and 5.9 rebounds. He improved his record in 2006-07, posting an average of 18.2 points per game. Greater success came the following season, when Iguodala helped lead the 76ers to a playoff berth. While the team lost in the first round to the Pistons, Iguodala finished his season with a career-best average of 19.9 points per game. He led the 76ers to another playoff berth the next season, this time falling to the Orlando Magic. The 2009-10 season was a disappointment for the team, with a regular season record of only 27-55.

During the 2010-11 season, Iguodala struggled with an Achilles injury, leading him to a career low in games played. However, he still managed to post a career-best assists average, and helped the 76ers make it to the playoffs with the seventh seed in the Eastern Conference. The team made it to the playoffs again the next season with the final seed, and went on to upset the Chicago Bulls. In the Conference Semifinals, the team was ultimately eliminated by the Boston Celtics.

In 2012, Iguodala was traded to the Denver Nuggets. That season, the team went on to the playoffs with a franchise record of 57-25 and a team record of 15 consecutive wins. However, they were defeated in the first round by the Golden State Warriors. Iguodala managed a solid season with the Nuggets, posting averages of 18 points and eight rebounds per game. 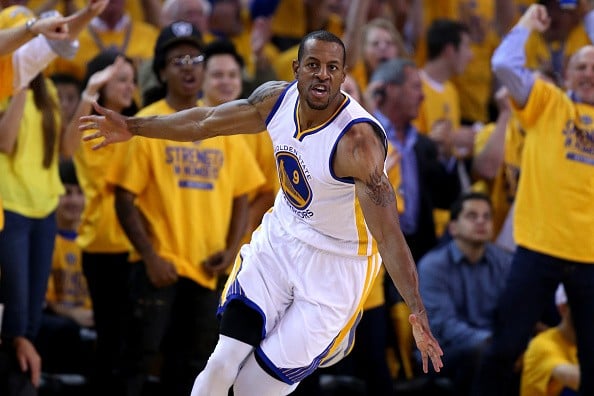 Iguodala turned down a five-year deal with the Nuggets to sign with the Golden State Warriors in 2013. In his first year with the team, he made two game-winning, buzzer-beating shots, and helped extend the Warriors' season-best winning streak to eight games. He was subsequently named to the 2014 All-NBA Defensive first team. Iguodala performed even better the next season, when the Warriors made it to the NBA Finals against the Cleveland Cavaliers. The team defeated the Cavaliers in six games, and Iguodala was named the Finals MVP. In the 2015-16 season, the Warriors finished with an NBA-best record of 73-9, and went on to a second consecutive appearance in the NBA Finals, once again facing the Cavaliers. Ultimately, the Cavaliers took the championship in seven games.

Iguodala had two of his most successful seasons in 2016-17 and 2017-18. In the former, he helped the Warriors finish the season as the first seed in the West, eventually winning the Western Conference Finals. The team then went to its third straight NBA Finals, defeating the Cavaliers. Iguodala and the Warriors went up against the Cavaliers in the Finals again the next season, and again won the championship in a sweep. Iguodala followed this incredible success with another Finals appearance in 2018-19, with the Warriors ultimately losing to the Toronto Raptors.

Heat and Return to Warriors

Following a brief stint with the Memphis Grizzlies in 2019, Iguodala was traded to the Miami Heat. When the Heat made it to the 2020 NBA Finals, Iguodala became only the tenth player in NBA history to appear in six consecutive Finals. Following the 2020-21 season, Iguodala became a free agent, and subsequently returned to the Warriors.

In August of 2015, Iguodala wed his childhood sweetheart, Christina Gutierrez. Together, they have a daughter named London and a son named Andre Jr.

On the business side of things, Iguodala is a tech investor, and frequently advocates for other NBA players to invest in the tech industry. He has partnered with entrepreneurs from Silicon Valley, and helped form the Players Technology Summit in 2017. Iguodala has also invested in such companies as Twitter, Tesla, and Facebook, as well as many tech startups.