What is Allen Iverson's net worth, career earnings, and salary?

Allen Iverson is a retired American professional basketball player who has a net worth of $1 million dollars. After earning more than $200 million from salary and endorsements during his career, overspending, a divorce, and general life challenges have had a serious impact on Allen's finances. In the paragraphs below, we detail Allen's financial troubles, legal problems, and infamous Reebok trust fund.

Allen Iverson was born on June 7, 1975, in Hampton, Virginia to a 15-year-old single mother, Ann Iverson. His father, Allen Broughton, left the family when he was young. He grew up in the projects of Hampton surrounded by drugs and crime in the background. He was beloved by the neighborhood kids and childhood friends often described him as looking out for the younger kids. Iverson attended Bethel High School and started as the quarterback for the football team. Iverson also played for the basketball team.

He briefly attended Georgetown University before being drafted by the Philadelphia 76ers in 1996. He eventually went on to become an 11-time NBA all-star and one of the greatest point guards of all time. Iverson was a controversial player both on and off the court. He was originally recruited straight from a Virginia jail cell by Georgetown University head coach John Thompson. Iverson had been arrested for his involvement in a bar fight and faced a lengthy prison term. Thompson intervened and was able to convince a judge to release Allen into his custody with the agreement that Iverson would attend Georgetown, play basketball, and graduate. Iverson left Georgetown early against Thompson's wishes and began a very successful career as an all-star NBA point guard. In 1999, Iverson earned his first trip to the Playoffs with the 76ers. He started in all ten playoff games before ultimately losing to the Indian Pacers in the second round. Before the next season began, Allen signed a six-year, $70 million contract extension. In the 2000 offseason, the 76ers tried to trade Iverson after his numerous arguments with coach Larry Brown, however, the deal fell through. In 2001, Iverson led the team to the finals. That same year he was named Most Valuable Player.

Allen played with the team for 10 years before being traded to the Denver Nuggets, where he played for two years. He then did brief stints with the Detroit Pistons and the Memphis Grizzlies before returning to the 76ers for one year.

Towards the end of his career, Iverson had been largely shunned by American NBA teams and was forced to lace up for the Turkish Basketball League and the Eurocup. He retired from basketball altogether in 2013.

During his NBA career, he was the top scorer four times between 1998 and 2005 and holds the record for 2nd highest per game scoring average behind Michael Jordan.

Iverson traveled to Japan in 1995 as a member of the USA World University Games Team. The team also included Ray Allen and Tim Duncan. He led the USA team in scoring, steals, and assists. He helped the team achieve an undefeated record over the host country of Japan and won the gold medal. In 2003, he was selected to be part of Team USA for the 2003 FIBA Americas Olympic Qualifying tournament in Puerto Rico. They won the gold medal and enjoyed a perfect 10-0 record. The team qualified for a berth in the 2004 Olympics. Allen started in each of the eight games he played in. On August 25, the USA scored an Olympic-qualifying 111-71 victory over Canada. At the end of the tournament, Allen ranked overall tied for 10th in scoring, fourth in steals, seventh in assists, and ninth in field goal percentage. Unfortunately, Iverson missed the USA's final two games due to a sprained thumb. He was named to the 2003 USA Senior National Team on April 29, 2003. 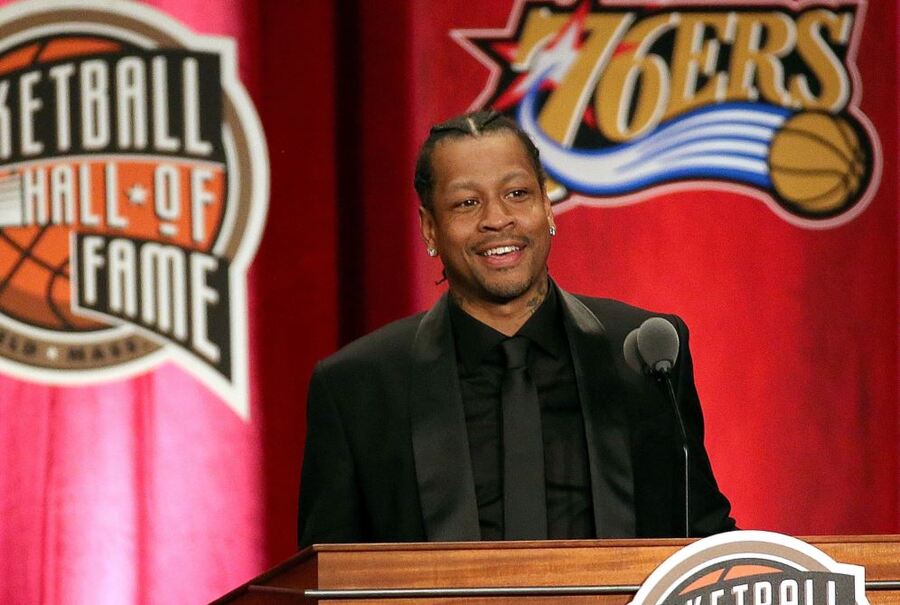 On February 14th, 2012, a judge in Georgia ordered the seizure of all of Allen Iverson's bank accounts in the wake of the former superstar's claims that he was flat broke. This was a shocking revelation considering that during his playing years Iverson earned nearly $155 million in NBA salary alone. And that figure does not even include the amount of money Allen brought home through endorsement and merchandising deals which is estimated to be an additional $60+ million.

Iverson's financial troubles are an unfortunately familiar story for many professional athletes. He allegedly traveled with an entourage of as many as 50 people at times. He showered friends and family, especially his mother, with cars, jewelry, houses, and expensive vacations. Allen's most recent financial troubles occurred after a judge ordered him to pay $900,000 to a Georgia jeweler but apparently the former superstar does not have the funds to cut the check.

In a December 2012 court filing, Iverson told a judge in Georgia that his monthly income was $62,500 but his expenses were $360,000. Of that $360k, roughly $125k went to paying back various creditors and another a large chunk goes to mortgages. Iverson also admitted to the judge that he was still spending $10,000 a month on clothes, $10,000 a month on restaurants/entertainment, and an additional $10,000 on groceries.

In 2001, Allen signed a very unique endorsement deal with Reebok. In addition to paying $800,000 a year for life, Reebok set aside $32 million in a trust fund that Allen will not be able to access until he turns 55 in the year 2030. This deal came to light when Allen's ex-wife filed for divorce. As a result of the divorce, Allen will inherit half the trust fund in 2030.

Iverson was arrested for carrying a concealed weapon and possession of marijuana in 1997. In 2002, he and his then-wife Tawanna had a domestic dispute. He threw her out of the house and then threatened two men with a gun while he was out looking for her. He pleaded no contest and did community service.

In December 2006, after a win against the Charlotte Bobcats, Iverson visited the Trump Taj Mahal. He won at a three-card stud poker table and was overpaid by $10,000. When the dealer realized the mistake and requested the chips back, Iverson refused and an argument between him and the casino staff ensued. He was subsequently kicked out and told not to return. That same year, Iverson's bodyguard was accused of assaulting a man at a night club on behalf of Iverson's entourage. The man suffered a concussion, ruptured eardrum, a torn rotator cuff, among many other injuries and emotional trauma. He sued Iverson and was awarded $260,000. Related, an Ohio man sued Iverson for $2.5 million in damages after a bar fight with Iverson's security guard in Detroit in 2009.

In addition, In 2013, Iverson was accused by his ex-wife of kidnapping his own children. She later dropped the accusation.

At age 16, Allen Iverson started dating high school sweetheart Tawanna Turner. They were married at The Mansion on Main Street in Voorhees, New Jersey. The couple has five children. Tawanna filed for divorce in March 2010. The divorce was finalized in 2013, but the couple got back together just one month after they finalized their divorce.

In 2000, Iverson recorded a single under the moniker Jewelz called "40 Bars." He was not able to release it due to controversial lyrics involving derogatory remarks about homosexuals. He agreed to change the lyrics but never released the album. 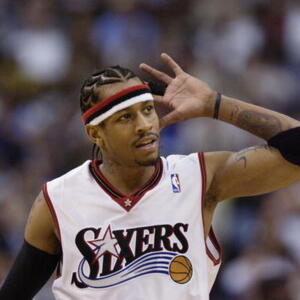