Al Horford net worth and salary: Al Horford is a Dominican professional basketball player who has a net worth of $60 million dollars. Al Horford was born in Puerto Plata, Dominican Republic in June 1986. He is a 6'10" center and power forward who played at Grand Ledge High School in Michigan.

Horford played his college basketball at the University of Florida where he won two NCAA Championships. In 2007 he was named SEC Tournament MVP, Second-team All-American – NABC, and Third-team All-American – AP. Horford was drafted #3 by the Atlanta Hawks in the 2007 NBA Draft and has played his entire career for the Hawks. He was named to the NBA All-Rookie First Team in 2008. Horford has been an NBA All-Star three times and in 2011 as named to the All-NBA Third Team and was the NBA Shooting Stars champion. Horford has also represented the Dominican Republic in international competition winning a Gold medal the 2012 Centrobasket and Bronze medals at the 2011 FIBA Americas Championship and the 2008 Centrobasket. In 2007 he signed a four year deal for $17.53 million and in 2010 he signed a five year deal for $60 million. Between 2017 and 2018, Al Horford earned $30 million between salary and endorsements. That's enough to make him one of the 50 highest paid athletes in the world for that year. 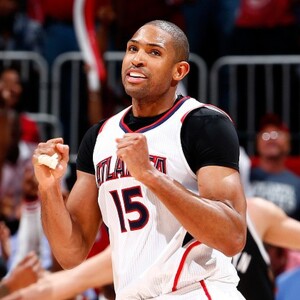