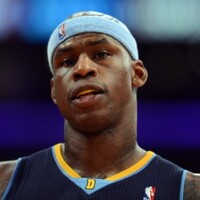 Al Harrington Net Worth: Al Harrington is an American professional basketball player who has a net worth of $40 million. Born in 1980 in Orange, New Jersey, Al Harrington was drafted straight out of St. Patrick High School in Elizabeth, New Jersey. The Indiana Pacers chose the 18-year-old with the 25th overall pick during the first round of the 1998 NBA Draft. He played with Indiana from 1998 until 2004 before playing for the Atlanta Hawks and later returning to the Pacers. Harrington has since played for the Golden State Warriors, New York Knicks, Denver Nuggets, Orlando Magic, and Washington Wizards. As of the fall of 2014, Harrington is playing overseas in China for Fujian Sturgeons. Harrington has appeared in 55 career NBA playoff games; his deepest run came with the Indiana Pacers in 2004 when the team advanced 16 games. The six-foot-nine, 245-pound power forward/small forward was the 1998 Naismith Prep Player of the Year and the 1998 "USA Today" Player of the Year. He was part of several trades throughout his NBA career: in 2004, he was dealt to Atlanta in exchange for Stephen Jackson and in 2007 he was traded with Stephen Jackson and several other players to the Golden State Warriors. Harrington was later part of a four-team trade to the Orlando Magic in 2012.