Adrian Dantley net worth – Adrian Dantley is a former professional basketball player who has a net worth of $1.5 million. Born in Washington, D.C. in 1955, Adrian Dantley played forward at Notre Dame, where he was a two-time, first-team All-American. He still holds several school records and is the second-leading scorer in Fighting Irish history. The 1976 Olympic gold medalist was drafted sixth overall by the Buffalo Braves and won the NBA's Rookie of the Year Award. He was traded to the Indiana Pacers, then quickly moved to the Los Angeles Lakes, where he would finish his second season in the league. Dantley was shipped to the Utah Jazz, his fourth team in four years. He remained with the Jazz until 1986 with six All-Star appearances before being traded to the Pistons. Dantley was again moved halfway through the 1989 season to the Dallas Mavericks in exchange for Mark Aguirre. That Pistons team would go on to win an NBA championship later that season. Dantley's career ended with the Milwaukee Bucks in 1991. He currently ranks sixth in NBA history for free throws. The Jazz retired his number-four uniform in 2007. Dantley was inducted into the Basketball Hall of Fame the next year. He worked with the Denver Nuggets as an assist coach, with a brief stint as interim head coach while George Karl battled cancer. He is married to his high school sweetheart, Dinitri Dantley. 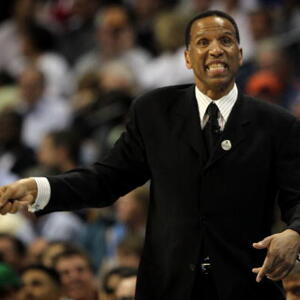