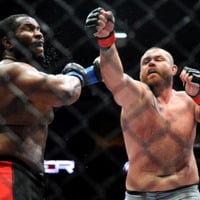 Tim Sylvia net worth: Tim Sylvia is an American former mixed martial arts fighter and professional wrestler who has a net worth of $800 thousand. Tim Sylvia was born in Ellsworth, Maine, in March 1974. Sylvia competed as a Heavyweight and a Super Heavyweight. He competed for UFC, Affliction, the International Fighting Championships, and ONE FC. Sylvia had a martial arts background. He practiced karate as a child and started wrestling in high school. He made his professional MMA debut in January 2001 defeating Randy Durant. He made his debut in UFC in September 2002 and brought his record to 14 – 0 by defeating Wesley Correira. Sylvia beat Ricco Rodriguez in February 2003 to win the UFC Heavyweight Championship. He defeated Andrei Arlovski in April 2006 to win the UFC Heavyweight Championship and lost it to Randy Couture in March 2007. Sylvia won the inaugural PWP Heavyweight Championship by defeating Paul Buentello in August 2010. His final fight was a loss to Ruslan Magomedov in October 2013 to bring his MMA record to 31 – 10. He retired in 2015 and is a police officer in Illinois one day a month.