How much is Tim Kennedy Worth?

Tim Kennedy net worth: Tim Kennedy is an American retired professional mixed martial artist who has a net worth of $1 million. Tim Kennedy was born in San Luis Obispo, California in September 1979. He has competed as a middleweight and light heavyweight. He began serving in the United States Army in 2004. Kennedy made his professional MMA debut in August 2001 when he defeated Scott Smith. In February 2003 he defeated Cruz Chacon to win the Extreme Challenge Middleweight Tournament. Kennedy lost to Ronaldo Souza in August 2010 for the vacant Strikeforce Middleweight Championship. He was defeated by Luke Rockhold in July 2012 for the Strikeforce Middleweight Championship. Tim Kennedy made his UFC debut with a win over Roger Gracie in July 2013. He had the Knockout of the Night in November 2013 against Rafael Natal and was in the Fight of the Night in September 2014 with a loss to Yoel Romero. Tim Kennedy finished his MMA career with a record of 18-6. 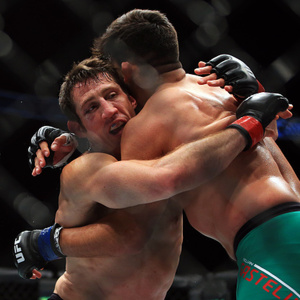