Thiago Alves net worth: Thiago Alves is a Brazilian Mixed Martial Artist who has a net worth of $2 million. He was born in 1983 in Fortaleza, Brazil. Thiago Alves competes in the UFC (Ultimate Fighting Championship) as a welterweight. At the age of 14 he started training in Muay Thai. Thiago Alves won his first MMA match as an amateur when he was 15 years old, defeating an opponent who was a full decade older.

By 17 he was training in MMA. He holds a brown belt in Brazilian Jiu-Jitsu. When Thiago Alves was 19-years old, he moved to Coconut Creek, Florida to undertake full-time training at the American Top Team facilities. In his professional Mixed Martial Arts career to date (2013), Known by the nickname "Pitbull', Thiago Alves has been in 28 matches with 19 wins, 11 of which were by knockout, two by submission, and six by decision. In his nine losses, only one was by knockout. Four were by submission and four by decision. Thiago Alves was last seen inside the MMA ring in March 2012 and following four surgeries to repair a knee injury, biceps tear, and an arteriovenous malformation in his brain, he isn't expected to return to the ring until 2014 with recovery and rehabilitation from these injuries. 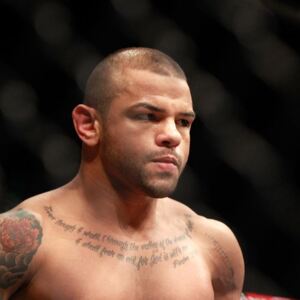