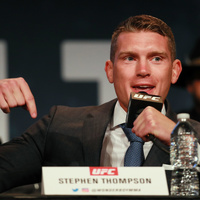 Stephen Thompson net worth: Stephen Thompson is an American professional mixed martial artist and former kickboxer who has a net worth of $3 million. Stephen Thompson was born in Simpsonville, South Carolina in February 1983. He holds a 5th degree black belt in Tetsushin Ryu Kempo Karate, a 1st degree black belt in Tetsu Shin Ryu Ju-Jitsu, and a black belt in American Kickboxing where he is 20 – 0 and is a 15 time champion. Thompson made his professional MMA debut in February 2010 defeating Jeremy Joles. His UFC debut came in February 2012 in a win over Dan Stitgen which earned him the Knockdown of the Knight. Thompson earned the Performance of the Night beating Robert Whittaker in February 2014. He would earn the same honor by defeating Jake Ellenberger in July 2015 and Johny Hendricks in February 2016. Thompson defeated Rory MacDonald in Jun 2016 to bring his record to 13 – 1. He will challenge Tyron Woodley for the UFC Welterweight Championship at UFC 205.