Shane Carwin net worth: Shane Carwin is a professional American mixed martial artist who has a net worth of $4 million. Shane Carwin has earned his net worth as a competitor in the heavyweight division of the Ultimate Fighting Championship (UFC); he was previously the UFC Interim Heavyweight Champion. Shane was born on January 4, 1975 in Greeley, Colorado, he and his two brothers were raised by their mother. He holds two bachelor's degrees one in Environmental Technology from Western State College, and another in Mechanical Engineering from the Colorado School of Mines. He suffered his first career loss in the UFC 116 against then-champion Brock Lesnar, this blow came after he won his first 12 MMA fights in the first round. As of March 21, 2011 Sherdog has ranked him the #5 heavyweight fighter in the world, and in August 2011 MMA Weekly ranked him #8. Carwin's debut in the UFC was on the undercard of UFC 84 against Christian Wellisch, he won this fight with a KO punch within the first 44seconds of the very first round. Carwin current wife is Lani, they have a daughter Alexia born on February 24, 2010, and he also has a son Kamden from a previous marriage. Carwin suffered a neck and back injury on November 2, 2010, from his fight with Dos Santos. He was suppose to face Roy Nelson at UFC 125, on January 1, 2011however, he later announced on his website that he would not be able to compete due to back and neck pain, which required surgery that took place on November 2, 2010. Carwin later stated that the neck surgery was a success, and he was 100% healthy. On October 16, 2011 it was announced that Carwin was expected to be out until mid-2012, due to his requiring back surgery. 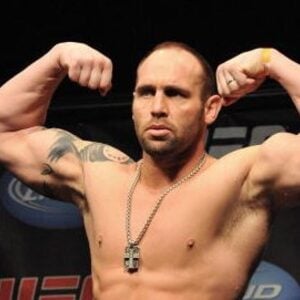