Rashad Evans net worth and salary: Rashad Evans is an American Mixed Martial Artist who has a net worth of $8.5 million dollars. Rashad Evans is signed to the UFC and is a former champion of the Light Heavyweight Division. He is a blackbelt in Brazilian Jiu-Jitsu, a blackbelt in Gaidojutsu, and NCAA Division 1 Wrestler. He currently trains in New Mexico with Jackson's Submission Fighting Grudge Training Center. Rashad Anton Evans was born in Niagara Falls, New York in September 1979. Evans wrestled in high school, making it to the state finals and receiving All-State honors twice. He placed 4th in the state in 1997 and 1998. He also finished 4th in the 1999 National Junior College Athletic Association National Championship (165 lbs.). He wrestled at Michigan State and had a record of 48-34, placing 4th in 2002 and 3rd in 2003. He won his first five MMA fights under Dan Severn in 2004. Evans became a contestant on the Spike reality TV show The Ultimate Fighter 2 in 2005. He was the shortest and second lightest competitor but won the competition and earned a three-year contract with UFC and a brand new car. In 2008 Evans beat Forrest Griffin to become the new UFC Light Heavyweight Champion. Rashad held the title for about five months before losing it to Lyoto Machida. Evans was a coach against Rampage Jackson for The Ultimate Fighter: Heavyweights. Evans was named the 2008 Fighter of the Year by Sherdog. He was unable to compete at UFC 170 due to an injury and is expected to return in the fall of 2014. His professional record is 19-3-1 as of 11/16/13. In January of 2014 Evans was listed at #3 in both the official UFC light heavyweight rankings and by Sherdog. 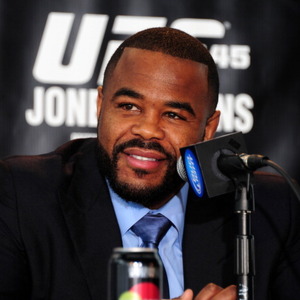