Phil Baroni Net Worth: Phil Baroni is an American mixed martial artist who has a net worth of $500 thousand dollars. Born April 16, 1976 in Long Island, New York, Phil Baroni currently fights in the Welterweight division and has also fought as a Middleweight. He is perhaps best known for his stint in the UFC where he holds a record of 3–7.

He has also fought in Pride FC, Strikeforce, Cage Rage, Dream, EliteXC, ONE FC, PFC, and Titan FC. Baroni developed a reputation for his boxing ability, although he is also an accomplished wrestler. Baroni is known for his rivalries with Matt Lindland, Ikuhisa Minowa, and the late Evan Tanner. In his early years, Baroni was expelled from Massapequa High School for assaulting a janitor at the school, just a week before the state wrestling championships. Baroni attended Nassau Community College where he became a two time All-American wrestler, placing fifth and second in the nation. Baroni then attended Hofstra University before transferring to Central Michigan University, where he was a double major in biology and psychology and earned his degree in psychology. Between the ages of 17 and 20, he was also an amateur bodybuilder, competing in six shows in which he placed either first or second. He studied kickboxing under Keith Trimble, participated in seven matches, winning all by knockout. He also competed in 10 amateur boxing matches, winning all 10 by knockout. Baroni debuted in the UFC in only his second professional fight, at UFC 30 in Atlantic City, New Jersey. He competed against fellow striking specialist Curtis Stout, and Baroni won by unanimous decision. He was an undefeated 3-0 before getting his second fight with the UFC at UFC 34 against Matt Lindland, whom Baroni would develop a rivalry with later in their careers. 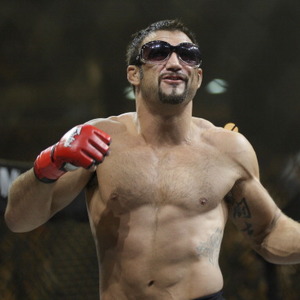