What is Nate Diaz's Net Worth?

Nate Diaz is a professional mixed martial artist signed with the Ultimate Fighting Championship. Nate Diaz has a net worth of $8 million. Previously, he competed in World Extreme Cagefighting, Pancrase, and Strikeforce, before winning the fifth season of "The Ultimate Fighter." Diaz is the younger brother of former welterweight champion and current UFC fighter Nick Diaz.

It has been reported that Nate's fee for showing up to the Conor McGregor fight was $2 million. He earned $250,000 from a Reebok sponsorship and $50,000 for the fight of the night bonus and $150,000 to show up to an after party. Most importantly he earned a cut of PPV revenue. His share of the PPV ended up at $10.5 million. Total it all up and Nate earned $13 million from the night. Conor earned $15 million.

Nate Diaz was born in 1985 in Stockton, California to a Mexican-American family. He has an older brother named Nick, with whom he began training in martial arts at the age of 11. As a teen, Diaz went to Tokay High School in Lodi, California.

Diaz began his professional fighting career competing primarily for World Extreme Cagefighting. In his first fight in 2004, he won against Alejandro Garcia. Two years later, competing for the WEC Lightweight Championship, he lost in the second round to Hermes França. Beyond WEC, Diaz also fought in Pancrase and Strikeforce.

In 2007, Diaz made his Ultimate Fighting Championship debut on the fifth season of the reality television series "The Ultimate Fighter." The season featured only lightweights, with Diaz fighting on the team of Jens Pulver. In the preliminary round, Diaz beat Rob Emerson, and in the quarterfinals defeated Gray Maynard. He faced Manvel Gamburyan in the finals, and won by submission after Gamburyan was forced to tap out due to an injury.

Following his victory on "The Ultimate Fighter," Diaz had early success in the UFC by defeating such opponents as Alvin Robinson and Junior Assunção. However, he demanded more challenging foes, leading to a match against Kurt Pellegrino at UFC Fight Night 13. In the fight, Diaz won via triangle-choke submission. He subsequently faced and defeated Josh Neer at UFC Fight Night 15. In 2009, Diaz had his first UFC loss against Clay Guida at UFC 94. He was more successful as the headliner at UFC Fight Night 19, where he defeated Melvin Guillard by submission to a guillotine choke.

In 2010, after losing three times in four fights, Diaz decided to move up in weight class. He went on to make his welterweight debut at UFC 111 against Rory Markham; following the weigh-ins, however, the fight was changed to a catchweight match. Diaz ultimately won by TKO in the first round. Subsequently, he decided to compete in both weight classes. In a welterweight match at UFC 118, he defeated Marcus Davis by choking him unconscious via a guillotine choke submission. 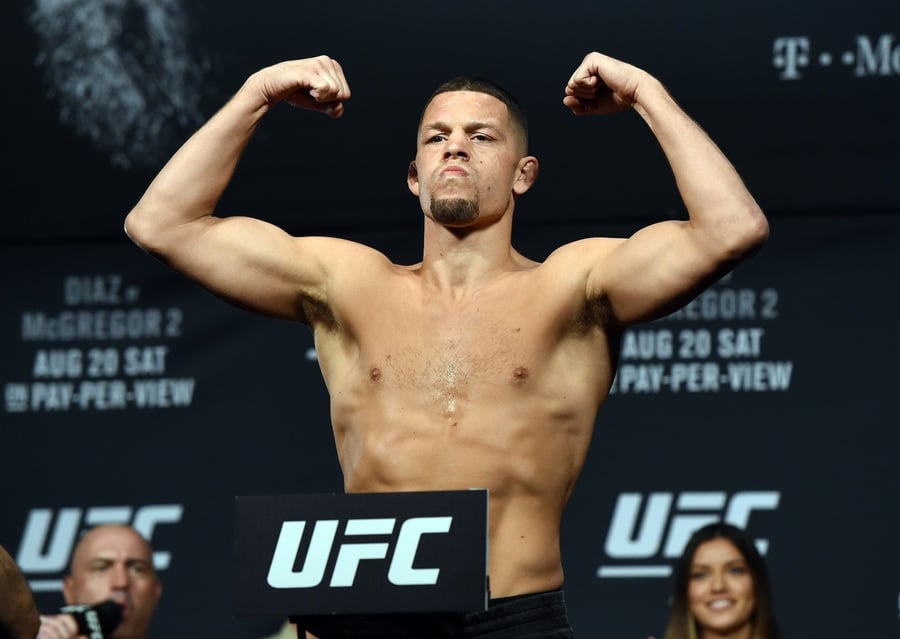 In early 2011, Diaz experienced losses to Dong Hyun Kim and Rory MacDonald. Later in the year, he bounced back by defeating PRIDE Lightweight Champion Takanori Gomi at UFC 135. He notched another victory at UFC 141 against Donald Cerrone in what was one of the best performances of his career. Another incredible match came at UFC on Fox 3, where Diaz defeated Jim Miller with a rolling guillotine choke. In May of 2014, Diaz was removed from the UFC's lightweight rankings after being deemed inactive by the organization.

Diaz returned to fighting in December of 2014 in a match against Rafael Dos Anjos at UFC on Fox 13. However, Diaz missed weight, and was fined 20% of his purse, which ultimately went to Anjos. Diaz then sat out another year, returning in December of 2015 to face Michael Johnson; he won the fight by unanimous decision. The next year, Diaz fought and defeated Conor McGregor at UFC 196. Winning by submission, the match gave Diaz his ninth submission victory in the UFC, tied for second-most of all time.

Over the course of his UFC career, Diaz has courted controversy for his occasionally rash and inflammatory behavior. In 2013, he was suspended by the UFC for 90 days and issued a $20,000 fine for using a homophobic slur on Twitter. Later, in 2015, he attracted attention for a profane post-fight interview on live television during which he called out fighter Conor McGregor. At a post-fight press conference in 2016, Diaz violated the USADA rule by smoking a CBD vape pen within four hours after his fight. However, as CBD is not considered a performance-enhancing drug, he was not sanctioned. The USADA subsequently lifted the substance from its banned list.

Diaz is tied with Jim Miller for most submission wins in the UFC Lightweight division, with seven. Additionally, he is tied with Frankie Edgar for most Fight of the Night bonuses, with eight.

With his girlfriend Misty Brown, Diaz has a daughter named Nikayla. 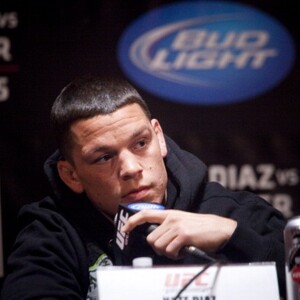