Miesha Tate net worth: Miesha Tate is an American martial artist and UFC fighter who has a net worth of $6 million. Miesha Tate is a former Strikeforce Women's Bantamweight Champion. She also earned a silver medal in the FILA Grappling Championships. Tate was born in 1986 in Tacoma, Washington and in high school wrestled on the boys wrestling team.

In 2005, she achieved the high school women's state championship and moved on to win nationals at the World Team Trials. After high school, Tate attended Central Washington University, where one of her competitors named Rosalia Watson, encouraged her to join the mixed martial arts club. Soon after joining, Tate formally joined the mixed martial arts sport club at Central Washington University. In February 2013, she officially joined the Ultimate Fighting Championship.  Tate is known for her double-leg takedowns, usually performed by picking up an opponent while pressing them against the cage. Numerous media outlets have described her ground game as powerful and dominant, noting that Tate's opponents are often overwhelmed if taken down. In addition to her success as a UFC fighter, Tate has been featured in the Fight Life, a martial arts documentary. She appeared nude within the ESPN Body Issue 2013 and also presented herself on the cover of Fitness Gurls Magazine, Dec 2013, which branded Tate, "the most attractive woman in MMA". Tate is currently dating fellow UFC fighter Bryan Caraway. 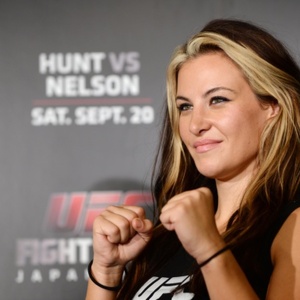