What is Michael Bisping's Net Worth?

Michael Bisping is a former English mixed martial artist who has a net worth of $9 million. Today, he is best known for his work as a sports analyst and commentator. He has also landed a few acting roles over the years. During his years as a mixed martial artist, he established quite the reputation while fighting in the UFC. Competing in the Middleweight and Light Heavyweight divisions, Michael eventually won the UFC Middleweight championship. He also experienced success in the now-defunct Cage Rage organization in the UK, winning the Light Heavyweight championship in that organization.

Bisping was a pioneering force for British fighters in the UFC, becoming the first UK fighter to compete in a UFC main event. He then became the first Brit to win a UFC championship when he won at UFC 199. No other British fighter has ever surpassed this feat. In 2019, Michael Bisping was inducted into the UFC Hall of Fame. Fans know him as "The Count," a nickname that he earned thanks to the fact that he is, in fact, considered a Count in Poland. This is due to a family line stretching back to his grandfather, who was a Polish Count.

Michael Gavin Joseph Bisping was born on February 28th of 1979 in Nicosia, Cyprus. Raised a "military brat" by a father in the British Army, Michael began training in Jujutsu at the age of eight. His family relocated to Clitheroe, Lancashire soon after his birth, after which he attended a Roman Catholic school. By the age of 15, he was competing in Britain's first MMA competitions. However, he abandoned his martial arts training at the age of 18.

This proved to be a very brief hiatus, as Michael resumed training one year later. During this time, he trained in boxing, kickboxing, and karate. After a brief kickboxing career that saw him win the North West Area title and two Pro British light-heavyweight titles, Bisping abandoned full-time training for financial reasons. Forced to find a job, Michael worked in factories and slaughterhouses for a time. He also worked for demolition companies, upholstery companies, the postal service, tiling companies, plastering companies.

Bisping eventually made his professional MMA debut in 2004, winning at "Pride & Glory: Battle of the Ages." During these early years, Michael fought in many UK tournaments, establishing a solid record and winning the Cage Rage light heavyweight championship. By 2005, he was considered one of the best MMA fighters in Britain. During this period, he fought mostly unknown fighters. However, he lost against notable names like Cyrille Diabaté and claimed victory against another familiar figure in Ross Pointon.

In 2006, Pointon and Bisping both found themselves competing in "The Ultimate Fighter 3," the reality show organized by the UFC. Trained by Tito Ortiz, Bisping won fights against Pointon, Kristian Rothaermal, and Josh Haynes to become win the competition as a Light Heavyweight fighter.

Having claimed victory in "The Ultimate Fighter 3," Bisping went on to enter the UFC as a Light Heavyweight fighter, winning against figures like Elvis Sinosic and Matt Hamill. However, he decided to fight as a Middleweight after losing against Rashad Evans. 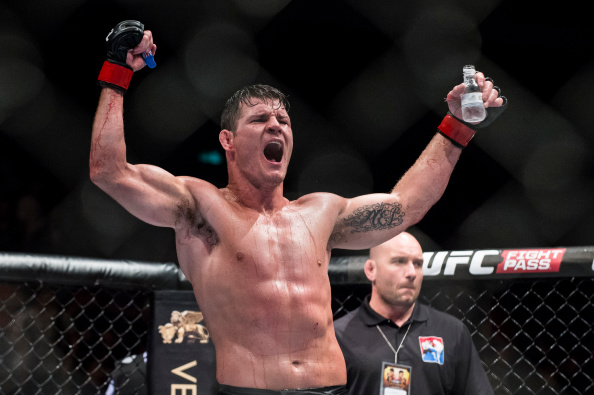 He then entered his first fight as a Middleweight against Charles McCarthy, winning by TKO. Further wins came against Jason Day and Chris Leben before becoming a coach for the ninth season of "The Ultimate Fighter." After the season ended, Bisping was knocked out for the first time by Dan Henderson, who had also acted as a coach in the television series. The knockout was severe, and Bisping had problems with cognition and memory after the fight.

However, Bisping bounced back with a win against Denis Kang. Unfortunately, his next fight was a loss against Wanderlei Silva. He then claimed victory against fighters like Dan Miller, Yoshihiro Akiyama, Jorge Rivera, and Jason Miller before losing against Chael Sonnen. Inconsistent results followed, and Bisping suffered a detached retina in a fight against Victor Belfort.

When Chris Weidman pulled out of a championship fight against Luke Rockhold in 2016, Bisping stepped up and accepted the fight with just 17 days' notice. He then won via knockout in the first round to claim the UFC Middleweight championship. This was considered one of the biggest upsets in UFC history. Bisping successfully defended his title once before losing it to Georges St-Pierre. After losing another fight, Michael retired in 2018, citing issues with his eyesight.

Bisping met his wife in Manchester. After getting married, the pair went on to have three children together. The family lives in Orange County, California. Their eldest son has become a promising wrestler who later competed in the NCAA Division II while attending San Francisco University.

After a fight with Victor Belfort left him with a detached retina, Bisping developed a medical condition known as strabismus. This condition means that his eyes are not properly aligned whenever he tries to focus on an object.

Bisping has expressed a distaste for Victor Belfort, mostly due to the fight that left him with a detached retina. At the time, Belfort was taking steroids. This made Bisping's loss controversial, and the British fighter has been critical of Victor ever since. When Belfort lost against Lyoto Machida in his retirement fight in 2018, Bisping stated that he believed Victor's entire career was made possible due to cheating and tacking steroids. 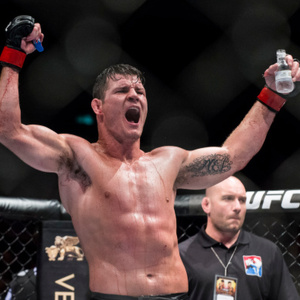