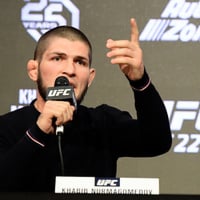 Khabib Nurmagomedov Net Worth, Salary and Career Earnings: Khabib Nurmagomedov is a former Russian mixed martial artist who has a net worth of $40 million. Widely regarded as one of the greatest fighters to have ever stepped inside the octagon, Khabib established an undefeated record of 29 wins and zero losses before retiring from the UFC in 2020. He was the longest-reigning UFC Lightweight Champion, having held the title from 2018 until his retirement in 2020.

A number of sources have proclaimed Nurmagomedov to be the best pound-for-pound fighter in UFC history and the number-one lightweight fighter of all time. Nurmagomedov is an ethnic Muslim Avar that comes from Dagestan, Russia. His style of fighting is heavily dependent on grappling, sambo, and wrestling. Today, Khabib is one of the most famous Russians in the world with over 24 million followers on Instagram.

Early Life: Khabib Abdulmanapovich Nurmagomedov was born on September 20th of 1988 in Sildi, Dagestan ASSR, Russian SFSR, Soviet Union. Almost immediately, Khabib was learning how to wrestle. While learning under the tutelage of his father, Nurmagomedov participated in unorthodox training techniques, such as wrestling with bears. After relocating to Makhachkala, Kabib started training in judo from the age of 15.

Career: Nurmagomedov's MMA career began in 2008 when he competed in Russia. After generating a 16-0 record in Russia and Ukraine, Khabib moved to the UFC in 2011. His first fight came in 2012 against Kamal Shalorus. Over the next few years, he defeated fighters like Gleison Tibau, Thiago Tavares, Abel Trujillo, and Pat Healy – defeating them all through mostly TKOs and submissions.

After beating Rafael dos Anjos in 2014, Nurmagomedov started to vie for a shot at the title. He won matches against Darrell Horcher, Michael Johnson, and Edson Barboza before finally getting a title shot against Al Iaquinta. He won the fight and became the new UFC Lightweight Champion. Over the next few years, Khabib successfully defended his title against Conor McGregor, Dustin Poirier, and Justin Gaethje. As of 2020, Nurmagomedov is retired. Somewhat notably, Khabib has never faced Tony Ferguson – another strong Lightweight title contender – despite numerous failed attempts at a match.

Fighting Style: Regardless of who he fights, Khabib always relies on his wrestling game. After taking his opponent down, Nurmagomedov prevents his opponent from using their arms and legs while striking them as they are unable to defend themselves. He is also known for talking to his opponents while they are "tied up" by his grappling technique.

Controversy: In 2018, Khabib and several other fighters were attacked by Connor McGregor while sitting on a bus at the Barclays Center in New York City. McGregor threw a metal dolly at the bus, shattering the windows and injuring both Michael Chiesa and Ray Borg. McGregor was ostensibly trying to get revenge against Khabib for an earlier altercation in which Nurmagomedov and his friends assaulted Artem Lobov. Lobov is McGregor's close friend. After McGregor fled, a warrant was issued for his arrest. Connor then turned himself in and faced three counts of assault and one count of criminal mischief.

After Khabib won against McGregor in 2018, he jumped over the octagon fence and assaulted Dillon Danis, Connor's cornerman. McGregor attempted to leave the octagon as a massive fight broke out, but he was charged by Khabib's cousin. After the two exchanged blows, Connor was attacked from behind by two of Nurmagomedov's cornermen. After the dust settled, Khabib's payment for the fight was withheld. Although his $2-million payout was eventually released, Nurmagomedov had to pay a $500,000 fine. He was also suspended from the UFC for nine months. McGregor received a $50,000 fine and was suspended for six months.

Career Earnings: Khabib has earned an incredible amount of money throughout his MMA career. In total, his earnings amount to $14,770,000. While this might sound like a lot of money, it's important to note that a huge percentage of those earnings came in Khabib's last two fights. With that said, here's a rundown on what Nurmagomedov earned over the years from his various fights:

In 2020, Nurmagomedov earned that exact same sum of $6.09 million after beating Gaethje – although some sources claimed that he earned more than his previous fight, and took away a career-high sum before retiring.