What is Ken Shamrock's net worth?

Ken Shamrock is a retired American mixed martial artist who has a net worth of $1.5 million dollars. Shamrock became one of the most renowned fighters in the UFC, although was also a professional wrestler and kickboxer. Outside of the ring, Ken also worked as a bare-knuckle boxing promoter. Experts today consider Shamrock to be one of the greatest fighters ever to set foot in an octagon. During his career, he headlined countless events and broke many PPV records for the MMA. Ken is also known as "The World's Most Dangerous Man," a nickname he earned after an ABC News special referred to him as such.

Over the course of his time in the UFC, Shamrock developed fierce rivalries with a number of other high-profile fighters. These included Royce Gracie and others. Ken eventually become the UFC Superfight Champion and was considered the best mixed martial artist on the planet for a period of time. In addition, Ken developed an impressive pro wrestling career, righting in the WWF and TNA.

Kenneth Wayne Kilpatrick was born on February 11th of 1964 at Robins Air Force Base in Georgia. Raised as a "military brat," Ken's family situation was not particularly good. His father abandoned the family when Ken was five, and his mother then married an Army aviator. With little supervision, Kilpatrick often got into fights in his rough neighborhood of Atlanta. When the family relocated to Napa, California, Ken and his brothers continued to get into fights. The boys also started doing drugs at this point.

Despite this questionable behavior, Ken also proved to be a natural athlete, playing football and baseball. At the age of ten, Kilpatrick ran away from home and was stabbed by another child. He was then kicked out of his family home at the age of 13, which eventually led him to serve time in juvenile hall. Eventually, he was adopted by Bob Shamrock, who ran a boys' home. Bob's positive influence led Kilpatrick to change his last name to Shamrock.

Ken started off as a pro wrestler, fighting in Japan before joining the UFC in 1993, quickly establishing a reputation as an unstoppable fighter. However, Royce Gracie was also fighting in the UFC and handed Shamrock his first defeat. This led to a rematch in 1995, which ended in a draw. Shamrock then became the UFC Superfight Champion before leaving for the WWF. Over the course of his career, he also performed as a wrestler with TNA, Impact Wrestling, and New Japan Pro Wrestling.

By the year 2000, Ken had re-emerged at the Pride Fighting Championships. This lasted until 2002, when he returned to the UFC. By this point, Tito Ortiz and Ken Shamrock had developed a fierce rivalry, which ultimately led to the two fighters facing off for the UFC Light Heavyweight Championship. Despite almost knocking Tito out, Shamrock's side eventually threw in the towel. A few more victories came before it became clear that his career was slipping away.

During the latter stages of Shamrock's career, he faced widespread criticism for continuing to fight even though he was obviously well past his prime. Instead of leaving the sport on a high note, Ken seemed intent on fighting in increasingly smaller venues with lackluster crowds. The general public recognized that he was "not even a shell of the man he once was," in the words of journalist Jeremy Botter. Dana White publicly stated that he'd rather pay Shamrock not to fight, even though the aging mixed martial artist believed that he had "one big fight left in him." White also stated that he believed it was dangerous for Ken to continue fighting.

All of this criticism came around 2008, but it would be more than 10 years before Shamrock finally decided to retire permanently. He was inevitably released by the UFC in 2007, and despite suing the UFC in an effort to keep fighting, Ken moved on to the International Fight League and fought a range of opponents. He then tested positive for steroids and was suspended for one year. When he did fight, he generally lost.

In 2015, he fought Kimbo Slice at Bellator 138, losing despite taking his opponent down twice. Some believe that Shamrock threw the fight intentionally. He then lost in a fight against Royce Gracie, despite video footage clearly showing an illegal groin strike by Royce. It was then revealed that Shamrock had tested positive for performance-enhancing drugs before the fight anyway, so the point was moot. After a few years of lying low, Ken quietly announced in 2019 on his Facebook page that he was not planning to fight again.

During the peak of his career, Shamrock's signature skills included grappling, speed, power, agility, and strength. The latter quality is something that has been especially celebrated by those who witnessed the man's raw power firsthand. His wrestling technique is mostly based on shoot wrestling from Masakatsu Funaki in Japan, which he learned during the 90s. After a long stint in the WWF that left him with several serious injuries, Shamrock returned to mixed martial arts with a very different fighting style. His injuries caused him to abandon his grappling technique for the most part and focus instead on striking.

In 2012, Ken Shamrock was accused of assaulting a woman at a mall in California. Ken's story is that he saw a fight between two people and attempted to break it up. When he tried to stop the fight, a woman jumped on his back and tried to choke him. Ken stated that he then threw her to the ground and struck her repeatedly until she was unconscious. His story was obviously believable, because no charges were filed against him. Police later stated that they believed Ken acted in self-defense. 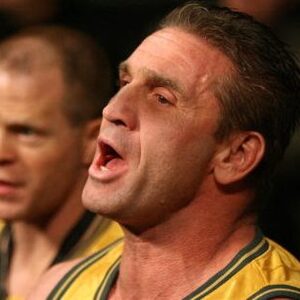