How much is Jon Bones Jones Worth?

Jon Bones Jones net worth: Jon Bones Jones is an American Mixed Martial Artist who has a net worth of $3 million dollars. Born in Rochester, New York, Jon "Bones" Jones, also known as Jonathan Dwight Jones, began wrestling in high school. He was a state champion and went on to win a national JUCO championship while he was in college at Iowa Central Community College. He left college early to begin his mixed martial arts career and made his professional debut in 2008. His incredible winning streak of six undefeated match-ups in his first three months of tournament participation brought the UFC calling. With only two weeks to train, he was invited to replace another fighter in his first UFC bout. He ended up winning the contest in a unanimous decision. Since then, he has been building quite a successful career and is considered to be #1 in official UFC pound-for-pound rankings. Despite his age, many analysts list him alongside  some of the greatest fighters the sport has ever seen. He is the youngest champion in UFC history, and has the highest total takedown attempts defended in light heavyweight history. In 2015, Jones tested positive for cocaine before his eighth title defense and admitted himself into a drug treatment center. In 2016, Jones was removed from UFC 200 after testing positive for a performance enhancing drug. Jones made his MMA debut in April 2008 defeating Brad Bernard. He won the USKBA Light Heavyweight Championship over Moyses Gabin in July 2008 and won his UFC debut against Andre Gusmao in August 2008. Bones suffered his first loss to Matt Hamill in December 2009 but had the Knockout of the Night in March 2010 over Brandon Vera. He had the Submission of the Night when he beat Ryan Bader in February 2011. Bones won the UFC Light Heavyweight Championship from Mauricio Rua in March 2011. He made several successful title defenses in which he had Fights of the Night and a Submission of the Night before being stripped of the title after he violated the UFC's Athlete Code of Conduct policy in January 2014. Jones won the UFC Light Heavyweight Championship over Ovince Saint Preux in April 2016 before being stripped. He had a no contest against Daniel Cormier in July 2017 which he won but was overturned. 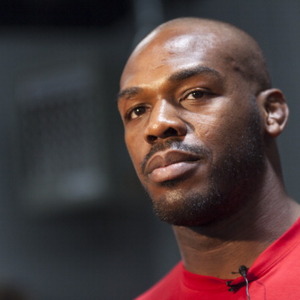