Big John McCarthy Net Worth and Salary: Big John McCarthy is a former American MMA referee who has a net worth of $1 million. He is currently a broadcaster for Bellator MMA. Big John McCarthy is best known as the first head referee for the Ultimate Fighting Championship. He also previously served as a Tactical Self-Defense Instructor at the Los Angeles Police Academy. Before establishing himself as a MMA referee, he had been a police officer for the Los Angeles Police Department (LAPD) since 1985. Spending some thirty years in that post, McCarthy decided to join UFC after being introduced to the organization by the Gracie family. John had been training with Rorion Gracie at the family's LA facility. He made his MMA refereeing debut at UFC 2 in 1994. He would eventually go on to referee hundreds of bouts in major MMA promotions and events. McCarthy briefly retired in 2007 before officially retiring in 2018. Upon his retirement he moved over to rival organization Bellator to work as a commentator.

How much did Big John McCarthy earn in the ring as a ref? John discussed this very question at length in a 2015 podcast. On the podcast McCarthy revealed that he could earn as little as $400 for a lower level fight. For a high profile fight such as the bout between Conor McGregor and Jose Aldo in December 2015 (which McCarthy ref'd), he earned a surprisingly-scant $1,900. 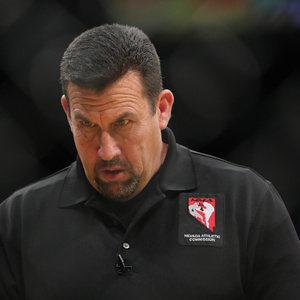