Joe Riggs Net Worth: Joe Riggs is an American mixed martial arts fighter who has a net worth of $500 thousand. Born Joseph Jonathan Riggs on September 23, 1982, in Sanford Maine, he is currently fighting as a Welterweight. Early in his career Riggs fought more as a traditional boxer before becoming full-fledged martial arts fighter who has fought in the Heavyweight, Light Heavyweight, Middleweight and Welterweight divisions.

In fact, he has seen a downward movement of one weight class at a time as his career has progressed. Thanks to his no-nonsense approach and bruising style in the ring, along with hard punches and heavy kicks, Riggs earned the nickname "Diesel". A former WEC Middleweight Champion, he has got the chance to fight for the UFC, Strikeforce, and Bellator. Out of 55 fights to date, Joe Riggs secured 40 wins. Off the boxing ring, he is married with one child. 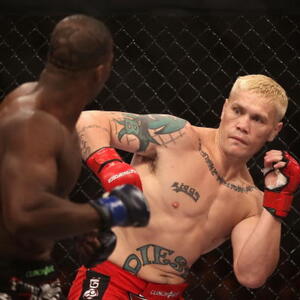