Houston Alexander net worth: Houston Alexander is an American professional mixed martial artist, who has a net worth of $400 thousand. He currently competes in Bellator's Light Heavyweight division. He has also been a fighter for the UFC, Shark Fights, and KSW. He was born in East St. Louis, Illinois and grew up in a rough neighborhood in Omaha, Nebraska where he had to quickly learn how to defend himself. As a teenager he played football, wrestled, and started boxing. He was also a very talented artist, mostly with graffiti, and was accepted to the Savannah College of Art & Design in Georgia during his senior year in high school but ultimately decided against attending because he did not want to leave his daughter. Instead, he worked as the head machine operator at an asphalt company, before entering the world of mixed martial arts. Alexander made his UFC debut on May 26, 2007 and knocked out his opponent in 49 seconds during the first round, which was by all accounts a huge upset. He had a successful career with the UFC, but was cut from the organization a few years later shortly after losing a fight against Kimbo Slice during the Heavyweights Finale. He went on to do many independent promotions and matches, most recently delivering a TKO to Matt Uhde at Bellator 117. Outside of his fighting career, Alexander is also known a "Scrib," "Cone-Dome," or "FAS/ONE" on Omaha's underground hip hop scene. Today, he is a DJ on KOPW 106.9 in Plattsmouth, Nebraska where he hosts an independent music show featuring hip hop. He also facilitates an elementary school program called Culture Shock School Tour, which teaches students about hip hop. Alexander is a single father raising six children; ever the devoted father, in 2000 he donated one of his kidneys to his eldest daughter. 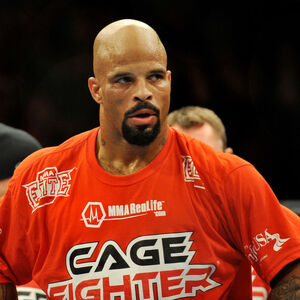