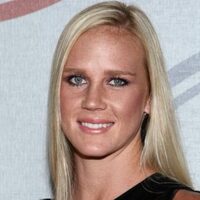 Holly Holm net worth: Holly Holm is an American mixed martial artist who has a net worth of $4 million. Holly Holm was born in Albuquerque, New Mexico in October 1981. Holm competes in the Ultimate Fighting Championship and is a former professional boxer and kickboxer. She started out in aerobics and then competed in the International Kickboxing Federation and won the amateur kickboxing USA national championship. Holm has a professional boxing record of 33 – 2 – 3. She has held 18 boxing titles from the World Boxing Federation, Women Boxing Archive Network, World Boxing Council, Global Boxing Union, Women's International Boxing Association, International Female Boxers Association, World Boxing Association, and International Boxing Association. Holm made her MMA debut in March 2011 when she defeated Christina Domke. She made her UFC debut in February 2015 with a win over Raquel Pennington to bring her record to 8 – 0. In April 2014 she won the inaugural Legacy FC Women's Bantamweight Championship. On November 14, 2015, Holly Holm made international headlines when she defeated Ronda Rousey at UFC 193.