What is Henry Cejudo's Net Worth?

Henry Cejudo is an American mixed martial artist who has a net worth of $2 million. Henry was born in Los Angeles, California to Mexican immigrants in February 1987. He has gone on to have an accomplished career in freestyle wrestling and MMA, even considered by some to be the greatest combat athlete of all time.

Henry's father, Jorge Cejudo, was extremely violent and spent time in prison after threatening to kill his entire family. Upon his release, he was deported to Mexico when Henry was 6 and died 14 years later. Inspired by his older brother's wrestling achievements, Henry began his rise out of poverty through competition.

Prior to his MMA career, Henry was an accomplished wrestler. He won the state title in high school all four years with a record of 150-0. As if that wasn't enough, Henry became the youngest American in history to win a Gold medal in wrestling at the 2008 Olympics when he was just 21 years old.

In 2013, Henry Cejudo announced on Twitter that he had begun MMA training, which excited the entire scene due to his storied wrestling career and physical abilities. Just two months later, fighting at 135 pounds in his MMA debut, Henry defeated Michael Poe in the World Fighting Federation in Arizona. After going 6-0 and becoming the #1 bantamweight prospect, Dana White stepped up and signed Henry to the UFC.

In December of 2014, Henry made his debut against Dustin Kimura and defeated him in a unanimous decision. He strung together more victories until getting a shot at the Flyweight title against Demetrious Johnson in April 2016 where he lost in the first round – a reality check for the rising star. Henry made $90,000 for the fight.

Henry bounced back over the next two years, even becoming a coach for The Ultimate Fighter 24 show. He finally had his redemption chance against Johnson at UFC 27 in August 2016 where he would win a split decision and become the Flyweight champion and first-ever Olympic Gold medalist to do so as well as grabbing $280,000 in earnings. As if that weren't enough, Henry got a shot at the heavier Bantamweight title, which was vacant at the time, and defeated Marion Moraes, which earned him $440,000. This made Henry the fourth UFC fighter in history to hold two titles at the same time.

After defeating Dominick Cruz on May 9, 2020 to retain his title, Henry announced his retirement from professional fighting. He had given up the Flyweight title to focus on Bantamweight, thus effectively retiring as a double champion (at least in my eyes).

In Henry Cejudo's MMA career, he earned a little over $3,000,000 between salary, sponsorships, performance bonuses, and PPV. His highest paying fight was against Dominick Cruz, bringing in a whopping $1.2 million.

Of course Uncle Sam and his entire team took their share, which is why his net worth is $2 million. 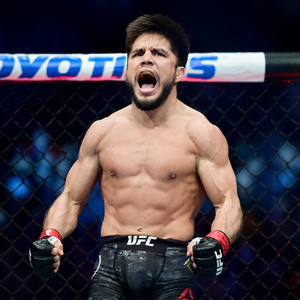