Fedor Emelianenko Net Worth: Fedor Emelianenko is a Russian politician and retired heavyweight mixed martial artist who has a net worth of $18 million. Often referred to as simply "Fedor" by his fans, Emelianenko is regarded as one of the most accomplished mixed martial artists of all time. Some even consider him to be the greatest MMA fighter to ever set foot in the octagon. Although he initially retired from MMA, Fedor still fights in the Rizin Fighting Federation and Bellator MMA. A rarity in the world of combat sports, Emelianenko holds championships in multiple martial arts. These include Sambo, Judo, and MMA.

Fighting as a heavyweight, Fedor began his career in 2000 with a number of victories. He soon became a household name in the MMA world and racked up a 10-year unbeaten streak from 2000 to 2010. Over the course of his career, he has beaten UFC champions, Pride FC champions, K-1 champions, and Olympic medalists. Over the years, he has won the title of "Top MMA Fighter" according to various media sources and magazines.

In addition to his athletic career, Fedor ventured successfully into the world of Russian politics. As of 2021, he is a staff member of Russia's Presidential Council on Physical Fitness and Sports, a position he has held since 2012. In addition, he is a deputy at Belgorod Regional Duma, a position he has held since 2010. In 2012, Fedor took a three-year break from mixed martial arts before returning to professional competition in 2015.

Early Life: Fedor Vladimirovich Emelianenko was born on September 28th of 1976 in Rubizhne, Luhansk Oblast, Ukrainian SSR, Soviet Union. When Fedor was two, he relocated with his family to the Belgorod, which was then part of the Russian SFSR. Raised by working-class parents, Emelianenko experienced poverty as a young boy and claims that this continues to be a motivation for him whenever he steps foot in the ring. At age 11, Fedor first started to practice Sambo and Judo. His coaches initially saw no real potential in the young boy, but he would gradually impress them with his perseverance and dedication over many years.

In 1991, Emelianenko graduated from high school and attended trade school. In 1994, he graduated with honors as a licensed electrician. In 1995, he joined the Russian Army as a military firefighter and then transferred to the Tank Division. During the late 90s, Fedor started to progress significantly and joined the Russian Judo and Sambo national teams. Unfortunately, there wasn't much money involved with this pursuit, and he soon quit in favor of higher-paying fights within MMA organizations.

Career: After joining RTT in RINGS, Emelianenko gained a fearsome reputation before losing in a controversial defeat. The defeat came in 2000, and it was stopped because Fedor had suffered a cut to the face. He then joined the PRIDE Fighting Championship, where he continued to establish an impressive record. This was the beginning of his 10-year streak of zero defeats. Over the next few years, Emelianenko won the PRIDE heavyweight championship and successfully defended his title until 2006.

After returning from retirement, he once again went into negotiations with the UFC, but a deal failed to materialize once again. Instead, Emelianenko fought in the Rizin Fighting Federation and Pride. In 2017, Fedor joined Bellator MMA. Over the course of his career, Emelianenko has beaten fighters like Quinton Jackson, Chael Sonnen, Matt Lindland, Renato Sobral, and many others.

Fighting Style: Numerous experts and publications have called Emelianenko the greatest MMA fighter of all time. He is the longest-reigning heavyweight lineal champion, and he has defeated countless former UFC champions. Fedor is a well-rounded fighter with virtually no weak points in his fighting style, although his strength is probably his striking ability. He has proven knockout power, and he is able to land a number of blows with deceptive speed.

Due to his sambo experience, Emelianenko can easily throw most opponents to the ground. Once he has taken opponents down, Fedor executes what has been called the best ground-and-pound technique ever seen in the octagon. He also excels at armbars and leg locks.

One of Emelianenko's most notable pre-fight behaviors is a distinctive staredown. Experts have compared this staredown technique to the behavior of psychopaths. After refusing to make eye contact when meeting his opponent and touching gloves, Fedor suddenly darts his eyes towards the other fighter and "looks through them" in an emotionless manner.

Relationships: After leaving the army, Emelianenko married Oksana in 1999. The pair had met previously during their school years together. That year, the couple welcomed their first child into the world. By 2006, the marriage had ended in divorce. In 2007, Fedor welcomed a second daughter into the world with his girlfriend Marina. The pair later married in 2009. In 2011, Marina and Fedor had another daughter together. In 2014, Emelianenko went back to his first wife, Oksana.

Health Issues: During the Covid-19 pandemic, it was reported that Fedor had contracted the novel virus. In 2021, it was announced that he had been released from a hospital in Moscow, having fully recovered. 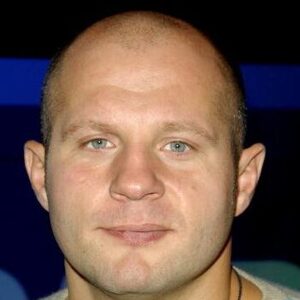