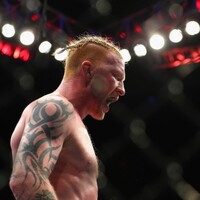 Ed Herman net worth: Ed Herman is an American professional mixed martial artist who has a net worth of $2 million. Ed Herman was born in Vancouver, Washington in October 1980. He has competed as a middleweight and a light heavyweight and became a professional in 2002. Herman was a finalist on the reality TV series The Ultimate Fighter 3. He has also fought in Strikeforce and Pancrase. Herman made his professional MMA debut in May 2003 defeating Ryan Pope. In March 2005 he defeated Glover Teixeira to win the SportFight Light Heavyweight Championship. Herman had the Fight of the Night in a win against Kendall Grove in June 2006 and again by defeating Trevor Smith in July 2013. He had the Submission of the Night in January 2007 beating Chris Price and in June 2007 defeating Scott Smith. Herman also had the Knockout of the Night by beating Joe Doerksen in November 2007. He defeated Tim Botesch and returned to the light heavyweight division in January 2016 when he was awarded the Performance of the Night to bring his record to 23 – 11 – 1.