How much is Derek Brunson Worth?

Derek Brunson net worth: Derek Brunson is an American mixed martial artist who has a net worth of $500 thousand. He is best known for being a middleweight in the Ultimate Fighting Championship.

Derek Brunson was born in Wilmington, North Carolina in January 1984. He is a middleweight who competed in NCAA Division II Wrestling and is a brown belt in Brazilian Jiu-Jitsu under Renzo Gracie. Brunson made his professional MMA debut in May 2010 defeating John Bryant. He made his UFC debut with a win over Chris Leben in December 2012. Derek Brunson had the Fight of the Night with a loss to Yoel Romero in January 2014. He also had the Fight of the Night in a loss to Robert Whittaker in November 2016. Brunson had the Performance of the Night with a win over Lyoto Machida in October 2017. In August 2020 he defeated Edmen Shahbazyan to bring his record to 21-7. 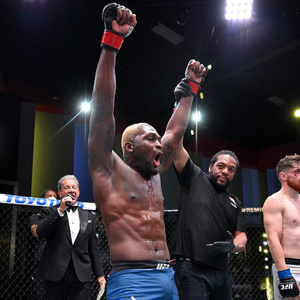