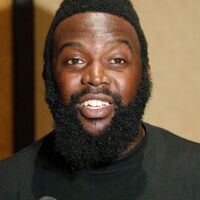 DaDa 5000 net worth: DaDa 5000 is an American fighter and entrepreneur who has a net worth of $150 thousand. DaDa 5000 was born in Cat Island, Bahamas in August 1977. Dhafir "DaDa 5000″ Harris is 6'3" and 275 pounds. He was raised in Miami, Florida. DaDa 5000 worked as a correctional officer and then worked for the Department of Children and Families. He worked with his childhood friend Kimbo Slice in the underground backyard fighting world. DaDa 5000 made his professional MMA debut in 2010 in the Action Fight League. He starred in a commercial with Arnold Palmer, Tiger Woods, and Lee Trevino and co-choreographed the fight scenes. DaDa 5000 has appeared in music videos by the artist Akon. He has a professional record of 2 – 0 after defeating Cedric James in 2010 and Tim Papp in 2011 in less than one minute. DaDa 5000 is the co-founder of BYB Extreme and stars in the 2015 film Dawg Fight.