Cung Le Net Worth: Cung Le is an American mixed martial artist who has a net worth of $4 million. Cung Le was born in Saigon, South Vietnam in May 1972. He and his mother left Vietnam under heavy gunfire in a helicopter. He lived in San Jose, California and took to martial arts.

He was an All-American wrestler in high school and won the California Junior College State Championships wrestling for West Valley College. Le was undefeated in professional kickboxing with a record of 19-0 and was also a three time kickboxing world champion. Le joined Strikeforce and made his debut in March 2006 when he knocked out Mike Altman in the first round. In March 2008 he defeated Frank Shamrock to win the Strikeforce Middleweight Championship. Le's first loss came to Scott Smith in December 2009 but he went on to defeat him in June 2010 in his last Strikeforce Match. Le's first match for UFC was a loss to Wanderlei Silva in November 2011. His last match was a win over Rich Franklin in November 2012. He is scheduled to face Michael Bisping in August 2014 at UFC Fight Night 48. Le was a coach and mentor for The Ultimate Fighter: China in 2013 and 2014. As an actor Le has starred in the films A Certain Justice, The Grandmaster, The Man with the Iron Fists, Dragon Eyes, Tekken, and more. Cung has two sons with his ex-wife Suzanne. 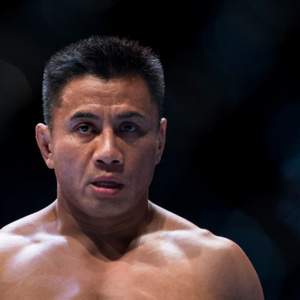