What Is Colby Covington's Net Worth?

Colby Covington is an American professional mixed martial artist and wrestler who has a net worth of $4 million. Covington fights in the Ultimate Fighting Championship's welterweight division and was an All-American at Oregon State University. He made his professional MMA debut in February 2012. Colby won the Interim UFC Welterweight Championship in June 2018, and he has won the UFC Fight of the Night twice. As of mid-2021, he was listed at #1 in the UFC's welterweight rankings. As a professional wrestler, Covington has competed for Impact Wrestling and WrestlePro.

Colby Covington was born Colby Ray Covington on February 22, 1988, in Clovis, California. He is the son of Noelle and Brad Covington, and he has two sisters, Candace and Callie. Brad wrestled at Southern Oregon University and the Oregon Institute of Technology. When Colby was 8 years old, his family moved to Oregon. He attended Thurston High School in Springfield, where he joined the wrestling team and won the 171 lb state championship during his senior year. Though Covington committed to Arizona State University, his test scores weren't high enough, so he enrolled at Iowa Central Community College instead. There, he won the 165 lb national junior college wrestling title during his freshman year and had a 34–0 record. At Iowa Central, his roommate was Jon Jones, who also became a UFC champion.

Colby transferred to the University of Iowa, but he was suspended from the wrestling team for a year after he was arrested for DUI and eluding police in August 2007. At the time of the arrest, his blood alcohol level was more than three times the legal limit, and he later said of the incident, "That was a real all-time low in my life, something I really wish I could take back." After transferring to Oregon State University, Covington qualified for the NCAA tournament during his junior and senior years, and as a senior, he placed fifth and earned All-American honors. Colby won the Pac-10 Conference twice, at 174 pounds, and in 2011, he earned a bachelor's degree in sociology. After graduation, he won a gold medal at the FILA Grappling no-gi world championships in 2013.

After Covington graduated from college, he was recruited for the mixed martial arts team American Top Team, and by the time he signed with UFC in 2014, he had a 5–0 record. His promotional debut with the UFC took place on August 23, 2014, when he defeated Anying Wang at UFC Fight Night 48. He then defeated Wagner Silva at UFC Fight Night 56 and Mike Pyle at UFC 187 before losing to Warlley Alves at UFC 194 in December 2015. Colby defeated promotional newcomers Jonathan Meunier and Max Griffin at UFC Fight Night 89 and UFC 202, respectively, then he won fights against Bryan Barberena (UFC on Fox 22), Dong Hyun Kim (UFC Fight Night 111), Demian Maia (UFC Fight Night 119), and Rafael dos Anjos (UFC 225 ). After defeating dos Anjos, Covington was named Interim UFC Welterweight Champion. In September 2018, he wasn't able to take part in a UFC 228 fight against then-champion Tyron Woodley due to nasal surgery, so the organization arranged a bout between Woodley and Darren Till instead and indicated that Colby would be stripped of his title after the Woodley-Till fight occurred. 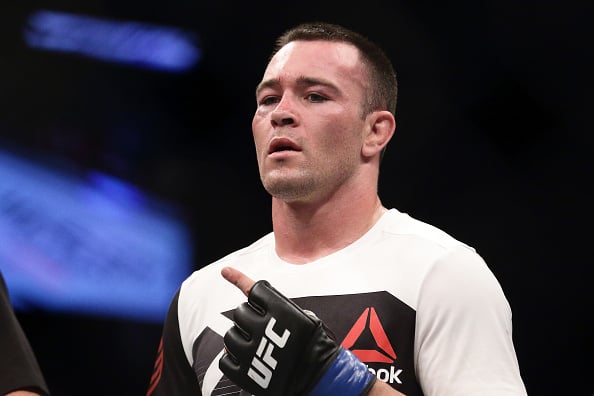 In August 2019, Covington defeated Robbie Lawler in UFC on ESPN 5's main event and set a record for most strikes thrown in a UFC fight (541). He fought Kamaru Usman for the Welterweight Championship in December 2019 and suffered a fracture of his left mandible in the third round. Usman defeated Colby with a technical knockout. The two had a rematch in November 2021, and Usman won via unanimous decision. Colby cut ties with American Top Team in May 2020, and he told "The Score," "I am a member of Colby Covington incorporated. I am a member of Colby Covington business, Colby Covington team, everything. This is my team now." In September 2020, he headlined UFC on ESPN+ 36, defeating Tyron Woodley in a technical knockout after Woodley's rib broke during the fight. In March 2022, he defeated Jorge Masvidal at UFC 272 and won the Fight of the Night award.

In May 2010, Covington was cited for fourth-degree assault after two men accused him of punching them during a verbal altercation. The Benton County District Attorney's Office decided not to pursue charges against Colby. Covington is a vocal supporter of Donald Trump and the Republican Party, and after he won the Interim UFC Welterweight Championship, he visited the White House and presented Trump with the title. Colby dedicated his win to the military and first responders, and he criticized Black Lives Matter (a movement that his opponent, Tyron Woodley, had expressed support for prior to the fight), saying, "Black Lives Matter is a complete sham. It's a joke. They're taking people that are complete terrorists. These are bad people." After the win, he also predicted, "If you thought that was a beating, wait until November 3 when Donald Trump gets his hands on Sleepy Joe. That's going to be a landslide." However, Joe Biden ended up receiving over seven million more votes than Trump and beat the record for most votes ever received by a presidential candidate in U.S. history. In March 2022, Covington reportedly suffered a broken tooth after being attacked by UFC rival Jorge Masvidal at a Papi Steak Restaurant in Miami Beach. Masvidal was charged with criminal mischief and aggravated battery.