Cody Garbrandt net worth: Cody Garbrandt is an American professional mixed martial artist who has a net worth of $1 million. He first gained wide attention after handing Dominick Cruz his first loss in a decade at UFC 207 in 2016.

Cody Garbrandt was born in Uhrichsville, Ohio in July 1991. That's the same small town as internet entrepreneur Scott DeLong. Cody started out as a boxer and won the ABA Junior boxing championship in 2007 and 2008. Garbrandt made his professional MMA debut in December 2012 when he defeated Charles Kessinger. He defeated Shane Manley as a bantamweight in November 2013 but returned as a bantamweight when he beat Dominic Mazzotta in March 2014. Garbrandt defeated James Porter in May 2014 and Charles Stanford in October 2014. He made his UFC debut in January 2015 when he beat Marcus Brimage and then he defeated Henry Briones in July 2015. Garbrandt defeated Augusto Mendes in February 2016 and beat Thomas Almeida in May 2016 when he had the Performance of the Night. He defeated Takeya Mizugaki in August 2016 before beating Dominick Cruz in December 2016 to win the UFC Bantamweight Championship and bring his record to 11-0 with nine knockouts.

At UFC 250 Cody defeated Raphael Assuncao with a KO punch in the second round. 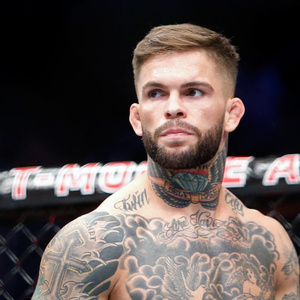