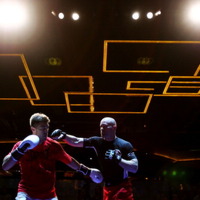 Chris Lytle Net Worth: Chris Lytle is an American retired mixed martial artist and boxer who has a net worth of $2 million. Chris Lytle was born in Indianapolis, Indiana in August 1974. He is best known for competing for the Ultimate Fighting Championship. Chris wrestled in high school and earned a degree in Sports Management at Indiana University. He started training to fight to keep himself active and then won a Hook N' Shoot championship at the Absolute Fighting Championship and won the Cage Rage World Welterweight Championship. Lytle was the Indiana state boxing champion. He was a contestant on The Ultimate Fighter 4 on Spike TV in 2006 and was a finalist, losing to Matt Serra. Lytle has a professional boxing record of 13 – 1 – 1 with 7 knockouts. He won his first MMA fight over Bo Hershberger in 1999. He won the Cage Rage World Welterweight Championship from Ross Mason in 2006. Lytle's last fight was a win over Dan Hardy in 2011 which brought his record to 31 – 18 – 5. He was never knocked out or submitted in his MMA and boxing career. Lytle works as a firefighter for the Indianapolis Fire Department and became an MMA analyst for Fox Sports 1 in July 2014.