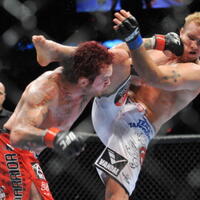 Chris Leben Net Worth: Chris Leben is a former American mixed martial arts trainer and fighter who has a net worth of $100 thousand dollars. He was born on 21 July, 1980 in Portland, Oregon. He fought for the Ultimate Fighting Championship (UFC) in the middleweight category. Chris decided to make his beginnings in fighting after noticing a MMA gym located on the street, ' Team Quest ' while visiting his brother at work. The trainer accepted Chris on the team, and shortly began to improve his skills. Thus, he was grooming with a team of members, such as Ed Herman, Matt Lindland and Randy Couture. After processing his skill, Chris began wrestling as an amateur, reaching a record of five-zero, and wins over the FCFF and middleweight UFCF titles. Chris Leben won his first 5 fights, three victories of which came by knockout, in the process of capturing the Gladiator Challenge, Sportfight, and the WEC middleweight title. Leben, who was once defeated with a knockout by Anderson Silva, clutches celebrated wins over Wanderlei Silva, Alessio Sakara, Jorge Rivera, Aaron Simpson, Patrick Côté, Mike Swick, Yoshihiro Akiyama and Jorge Santiago. Chris was one of the most outspoken and controversial mixed martial art fighters on The Ultimate Fighter, mainly due to his personality which is very abrasive and depressive.