Early Years: Cain Ramirez Velasquez was born on June 28, 1982, in Salinas, California. His father Efrain is from Sinaloa, Mexico, and moved to the U.S. as an undocumented immigrant. He met Cain's American born mother, Isabel. They fell in love, got married, and Efrain became a U.S. citizen. Cain is one of three children of his parents. He has a brother named Efrain, Jr. and a sister named Adela. Cain and his siblings grew up in Yuma, Arizona. He wrestled throughout high school and won the 5A Arizona Wrestling Championship two times. He also played high school football as a linebacker. He was captain of the wrestling and football teams during his senior year of high school. Cain enrolled at Iowa Central Community College and wrestled during the 2001-2002 season. He won the heavyweight division of the NJCAA National Championship. He transferred to Arizona State University for his sophomore year. He wrestled on the Sun Devils' team for three years.

After his shoulder healed, Velasquez returned to the octagon in late 2011 to defend his Heavyweight title against Junior dos Santos. Velasquez had his first loss in this match and was knocked out by dos Santos a little over one minute into the first round. Velasquez wasn't down for long and he beath Antonio Silva in the first round before taking on a rematch with dos Santos, which Velasquez won. The years from 2015 to 2019 saw the decline of Velasquez's career with losses to Fabricio Werdum and Francis Ngannou. Velasquez announced his retirement from MMA in October 2019.

Velasquez didn't retire completely. After retiring from MMA, he announced that he'd signed a multi-match deal with Lucha Libra AAA Worldwide's Heavyweight division. His first match was a six-man trios action at Triplemania XXVII which was a win for Velasquez's team.

Velasquez made his WWE debut on October 4, 2019, on the first episode of the 20th season of Fox's "SmackDown." Velasquez confronted and attacked Broke Lesnar. Velasquez was then set to face Lesnar for the WWE Championship on October 31, 2019. Lesnar retained his WWE Championship in 88 seconds making Velasquez tap out to the Kimura Lock.

In April 2020, WWE released Cain Velasquez from his contract after just six months. He performed in just two matches. The cuts were one part of WWE's plan to deal with the financial fallout of the ongoing coronavirus pandemic. Some outlets reported that Velasquez was cut from the WWE due to "backstage mistakes," including revealing the lineup of a future first. Velasquez was also accused of knowing about a knee injury that needed to be surgically repaired before he signed his WWE contract.  However, WWE is reportedly leaving the door open for Velasquez's return to the WWE at a later date.

Personal Life: He married his girlfriend Michelle on May 28, 2011, and their daughter Coral Love Velasquez was born on May 6, 2009. Their son was born in 2018. Velasquez speaks English and Spanish fluently. He has been a guest star on Spanish-language television networks as Telemundo and Univision. He also appeared as a featured guest on "Lopez Tonight." Velasquez also appeared in the music video "Te Siento" for Wisin & Yandel.

In the early days of his professional fighting career, Cain trained at a facility in California far from his home. He worked as a bouncer at a club near his training center and frequently slept in his car rather than making the long drive back to Yuma, Arizona each night. He told his mom he was staying with a friend.

Velasquez enters the ring to the song "Los Mandados," which tells the story of a Mexican immigrant who tried to cross the border into the U.S. His father Efrain made six trips trying to get into the U.S. and was deported all six times. On Efrain's seventh trip to the U.S., he met his future wife Isabel.

Velasquez has a "Brown Pride" tattoo on his chest as a display of Mexican pride and a reminder of the hardships his parents went through.

Velasquez originally wanted to be a boxer but his family was too poor for gloves and lessons. Wrestling was cheaper and easier to get involved with.

Salary Highlights: Cain Velasquez earned $450,000 for his fight against Francis Ngannou on UFC on ESPN1 on February 19, 2019.

Real Estate: In 2014, Velasquez and his wife listed their 5,100 square foot estate in Gilroy, California for $1.7 million. The home was built in 1999 and sits on more than two acres. A month later, the price was dropped to $1.6 million. 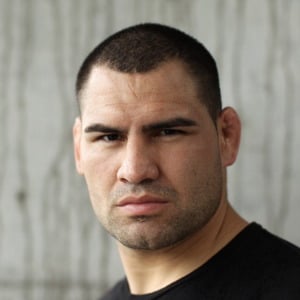