At the age of 14 he started lifting weights in hopes of gaining strength to handle the bullies at his school. Born in Babruysk, Byelorussian SSR, Soviet Union on February 4, 1979, Arlovski is better known to the public as The Pit Bull. He stands at six feet and four inches and 249 pounds with a reach of 77 inches. He fought with an orthodox stance in the heavyweight division out of Chicago, Illinois and has been active in MMA since 1999. He is currently ranked as an International Master of Sports in Sambo as well as a blue belt in Brazilian jiujitsu. He has a boxing record of one win by knockout as well as a mixed martial arts record of 22 wins and ten losses. Arlovski to an interest in martial arts when he was sixteen years old and studied Sambo as well as Kickboxing. He originally enrolled in the police academy but found that competitive defense was where his strengths were. He eventually received a silver medal at both the Sambo World Cup and the World Sambo Championship. He made his UFC debut in UFC 28 and continued on until UFC 82 after maintaining a record of 10-4 as well as a 3-2 in title fights. He continued to fight on various teams and events until his return to the UFC in 2014. Along with fighting, Arlovski has appeared in films such as 8 of Diamonds, Universal Soldier: Regeneration, and Universal Soldier: Day of Reckoning. He can also be seen on MTV's Bully Beatdown. 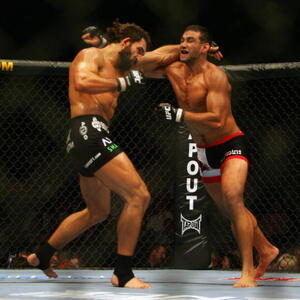