Al Iaquinta net worth: Al Iaquinta is an American mixed martial artist who has a net worth of $400 thousand. Al Iaquinta was born in Valley Stream, New York in April 1987. He is a lightweight who had a perfect amateur record of 14-0. Iaquinta made his professional MMA debut in February 2009 with a win over Mervin Rodriguez.

In September 2011 he won the vacant ROC Lightweight Championship when he beat Gabriel Miglioli. Al Iaquinta lost that title in his next fight to Pat Audinwood in November 2011. He competed in The Ultimate Fighter: Live where he was 4-0 before losing to Michael Chiesa in The Ultimate Fighter: Live Finale in June 2012. Al Iaquinta lost to Khabib Nurmagomedov in April 2018 for the vacant UFC Lightweight Championship. In December 2018 he defeated Kevin Lee in the Performance of the Night and in May 2019 he lost to Donald Cerrone in the Fight of the Night. Iaquinta lost to Dan Hooker in October 2019 to bring his record to 14-6-1. 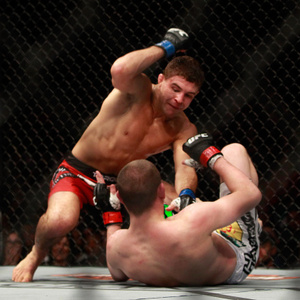