Michael van Gerwen net worth: Michael van Gerwen is a Dutch professional darts player who has a net worth of $6 million. Michael van Gerwen was born in Boxtel, Netherlands in April 1989. As of January 2017 he was the reigning PDC World Champion and the #1 ranked player in the world. Van Gerwen started playing darts at 13 years old and within four years he won the World Masters and threw a televised nine-dart finish, making him the younger person to do both of these things.

After that he struggled until he broke through in 2012 when he climbed in the rankings from #38 to #4 and won his first Grand Prix title and made the final at the 2013 World Championship. Van Gerwen became the youngest winner of the PDC World Championship at the age of 24 in 2014. He claimed the 2015 Grand Slam of Darts giving him wins in all the major PDC titles. Van Gerwen held the highest average recorded in televised darts at the 2016 Premier League. He won 18 tournaments in 2015 and another 26 in 2016. He is the second most successful player in PDC history behind Phil Taylor and holds all seven PDC major ranking titles. 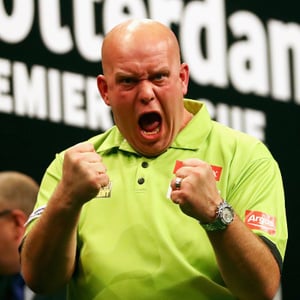