Clarke entered the world of cricket fairly early, making his debut for his home team New South Wales at the age of 18. His debut performance was considered good enough to earn him a scholarship from the Australian Cricket Academy, and he was named a captain of Australia's under-19 team. Having slammed two subsequent centuries for New South Wales, he was chosen as an Australia "A" tour to England. Shortly after, he became a hot topic in cricket circles, especially after he claimed the second best average in Australia "A" South Africa tour. Then in the ICC Cricket World Cup, Clarke made his ODI debut, earning a win for Australia against England. His consistent performances in ODIs made him earn his Test debut against India at Bangalore in 2004. Luckily, his debut ended successfully, making a score of 151 and thus leading Australia to victory. In recognition for his performance throughout 2004, Clarke was presented with Allan Border Medal the following year. Clarke's meteoric rise continued during Australia's World Cup 2007, and in 2011 he was named full-time captain of the Australian Twenty20 cricket team. In November 2012, he scored a double century at the Adelaide Oval and become the only Test batsman to ever achieve four double centuries in a calendar year. Apart from his active cricket portfolio, he can be also proud of his gorgeous wife, Australian model and presenter Kyly Boldy. 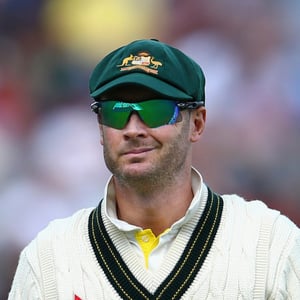