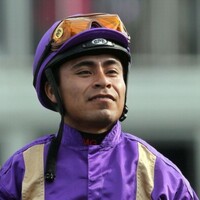 Martin Garcia net worth: Martin Garcia is a Mexican American horse racing jockey who has a net worth of $3 million. Martin Garcia was born in Veracruz, Mexico in October 1984. He emigrated to the United States in 2003. While working at a deli in California he was introduced to a former jockey who helped get Garcia started in the business. He won his third career ride in 2005 at the Bay Meadows Fair aboard Wild Daydreamer. Garcia won the Preakness Stakes in 2010, the Kentucky Oaks in 2011, and the Breeders' Cup Classic in 2014. His highest rank on the National Earnings List for Jockeys came at 9th in 2010. Garcia finished 10th on that list in 2014. He has ridden horses such as Lookin at Lucky, Kinsale King, Bayern, and Conveyance.