Mariusz Pudzianowski Net Worth: Mariusz Pudzianowski is a Polish former strongman and current mixed martial artist who has a net worth of $8 million dollars. Born February 7, 1977 in Biała Rawska, Poland, he is also known by his nickname, Pudzian. Pudzianowski has won five World's Strongest Man titles-more than any other athlete and has also won two runner-up titles.

In 2009, he debuted as a mixed martial artist. Pudzianowski proved himself capable of bench pressing 640 pounds (290 kg), squatting with 837 pounds (380 kg) and dead-lifting 915 pounds (415 kg). His father was also a weightlifter. Since the age of 11 he has been training the Kyokushin style of karate and his current grade is a 4th kyu green belt. At the age of 13 began strength training and at the age of 15 he began boxing training. Pudzianowski debuted in professional sports at the tender age of 16, taking part in Polish Weightlifting Championship in the bench press event. Pudzianowski spent time in prison for assault in the early 2000s, citing that he wanted to stop a "local mafia boss" and was subsequently accused and convicted of assault and stealing a gold chain. 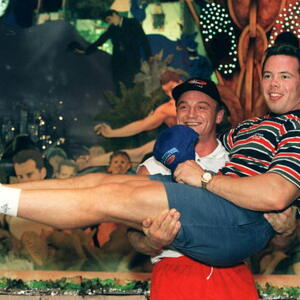