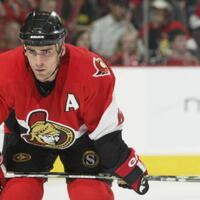 Wade Redden Net Worth: Wade Redden is a Canadian retired professional hockey player who has a net worth of $45 million. Wade Redden was born in Lloydminster, Saskatchewan, Canada in June 1977. Redden played for the Lloydminster Blazers in the AJHL and the Brandon Wheat Kings in the WHL. He was drafted #2 by the New York Islanders in the 1995 NHL Draft. He signed a two year deal worth $13 million with the Senators in 2006. In 2008 Redden joined the New York Rangers and signed a six year deal worth $39 million. He played in the AHL during the lockout and joined the St. Louis Blues in 2013 for a one year deal worth $800,000. He was traded to the Boston Bruins in 2013 and officially retired in 2014. Redden played in the NHL All-Star Game in 2002 and was named in 2004 but could not play. He won the Victoria Cup with the Rangers in 2008 and was the NHL Plus/Minus Award winner in 2006. Redden represented Canada in international competition and won Gold medals at the 2004 World Cup of Hockey and 1995 and 1996 World Junior Championships.