Tarasenko was drafted #16 by the St. Louis Blues in the 2010 National Hockey League Draft. He has played for the Blues since 2012. Tarasenko has represented Russia in international competition first playing on the Russian junior team three times and winning a silver medal at the IIHL World U18 Championships in 2009. He was the captain of the gold medal 2011 World Junior Ice Hockey Championship team. He won a silver medal playing for Russia at the 2015 Czech Republic World Championships and represented his country at the 2014 Winter Olympics in Sochi. He was named an IIHF World U18 Championship First Team All-Star in 2009 and the NHL Rookie of the Month in January 2013. Tarasenko signed an eight year deal for $60 million in 2015 with St. Louis. 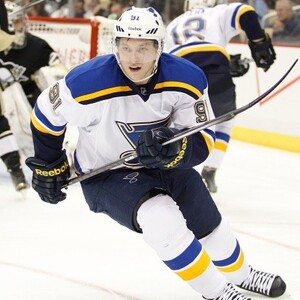